Part of Soho, London, came to a standstill on Tuesday evening as the London Gay Men's Chorus performed a moving tribute to mark 20 years since a hate attack at a popular pub.

The choir sang at a vigil where hundreds of people gathered to remember the victims of a nail bomb attack that targeted the LGBTQ+ community on April 30 1999, killing three people, and injuring 79 others.

The choir sang Simon And Garfunkel's "Bridge Over Troubled Water" outside the Admiral Duncan pub in Old Compton Street.

The 1999 attack followed two separate blasts within two weeks which targeted minority groups in London – in Brixton, and in Brick Lane in the East End.

Andrea Dykes, John Light and Nick Moore were killed in Soho in what was the last of the bombings.

“Today marks 20 years since the horrific nail bomb attack at the Admiral Duncan pub in Soho." London Mayor Sadiq Khan said. "It was the third in a series of cowardly attacks that targeted London's black, Asian, and LGBT+ communities." 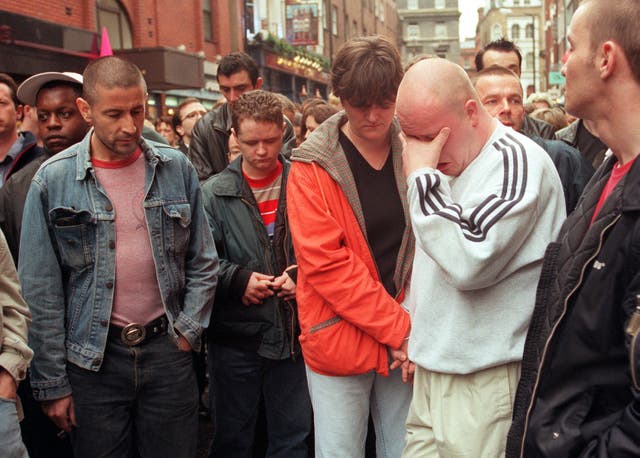 Friends and relatives of the victims of the Soho bomb blast attend a Vigil of Remembrance, at the scene outside the Admiral Duncan pub in 1999.

“It's vital that we ensure we continue to defeat those who seek to divide us by showing how we don't just tolerate our differences in London, but respect and celebrate them," he continued. "London's diversity will always be our greatest strength."

Attended a very moving service and event today for the victims of the three bombs that went off in London 20 years ago including the three people that died and 79 who were injured on 30th April 1999 at the Admiral Duncan pub in Soho.
Hatred will never win.#LoveWinspic.twitter.com/IY6eBVFe2J
— Steve Doran (@SteveDoran11) April 30, 2019

The Admiral Duncan first opened in 1832, and is known as one of Soho's oldest gay pubs. 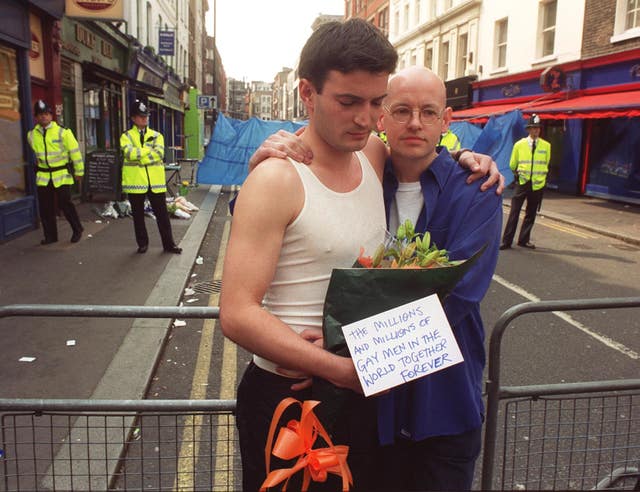 Two men arrive with a floral tribute at the scene of the bomb blast, in the centre of Soho, London. (PA).

“Attended a very moving service and event today for the victims of the three bombs that went off in London …" Steve Doran, who attended the vigil, said on Twitter. "Hatred will never win."