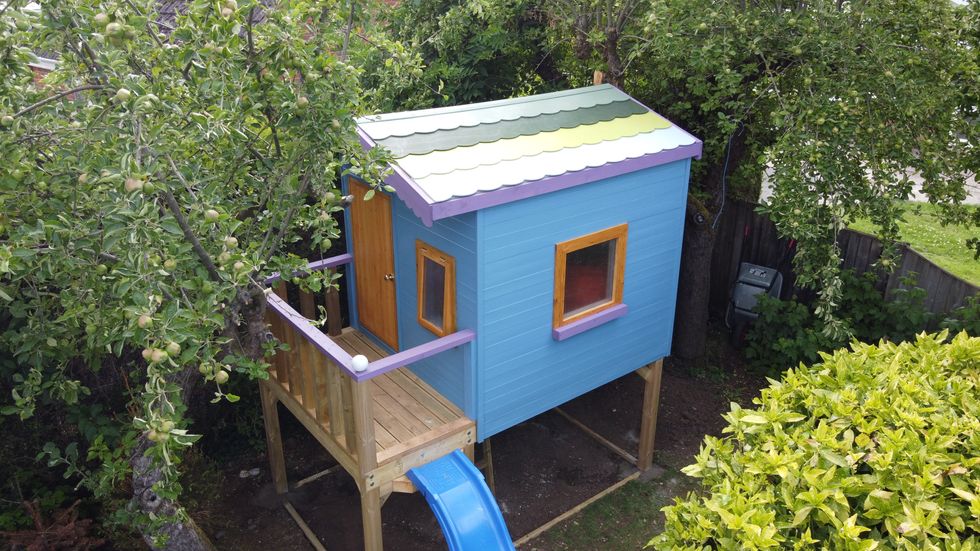 A life-sized replica of a popular dolls' treehouse that a father built for his kids is preparing to welcome its first paying guests after being listed on Airbnb.

Jason Kneen, 49, had the treehouse – which is modeled on one made for Lottie Dolls – built in the garden of his family's home in Faberstown, Wiltshire, England, to encourage his five children to get out of the house more during lockdown.

The treehouse features a hammock, a swing and a slide (Jason Kneen/PA)

Mr. Kneen decided to speculatively put the construction on Airbnb with a £500 (~$654)-a-night price tag – and was surprised to get an inquiry from a family of two adults and two kids keen to come and stay on Saturday.

“Apparently the kids can't stop talking about it, they're obviously fans (of Lottie)," Mr. Kneen told the PA news agency.

“So they're coming over. I'm making pizza for them, we're doing breakfast in the morning…all of a sudden we're B&B hosts, which is a bit weird."

Mr. Kneen employed the help of local tradesman Joe Arney to recreate the treehouse, which is around six feet by eight feet, complete with a slide, a hammock and camping bunkbeds – which have already had good use from his own children.

It has wifi access as well as smart-lights powered by Alexa, and a power source, but otherwise facilities are limited to a toilet in a nearby “Tardis" – a previous passion project for Mr. Kneen – and an outdoor sink.

“I've told them it's small, it's cozy, you're going to be close together, the only amenities is the Tardis loo and we've got an outdoor sink you can use and they seem happy with that."

The treehouse has been in place for a little under a month, and was something the family had been looking to build for a little while.

“We wanted something elevated and that used a slide or something to get down, and the girls have got this Lottie Doll treehouse which, when we looked at it, was like 'that's it, that's basically what we want'."

Mr. Kneen said his five children – who are aged between two and 11 – are broadly on board with having strangers staying in their treehouse.

“They like it but I think Poppy, my oldest daughter, is a little bit jealous – she wants commission."

The treehouse is 'cozy', according to Mr. Kneen (Jason Kneen/PA)

The finished product, which took Mr. Arney about two weeks to build, has drawn widespread admiration, including from Arklu, the manufacturers of Lottie Dolls.

“We've had lots of good feedback from the Lottie people," Mr. Kneen said.

“Rosie, our youngest daughter, has Down syndrome, and they basically said as a thank you for doing this, they want to make a doll for her, so they've sent us a design through, and they're actually going to do a Down syndrome doll which will be ready by Christmas."

The family are going to donate profits from the Airbnb venture to Andover Twenty 1, a local charity that supports people with Down syndrome.