A mom-of-two who was subjected to a campaign of terror by a nightmare neighbor which culminated in a vicious attack – leaving her with 21 stitches to her face – has slammed judges after her assailant was spared jail.

Ironically, Samantha Murphy, 32, had originally been happy to meet the woman who assaulted her – Sarah Louise Piecko – who lived in the flat below and had openly welcomed her when she moved from Cardiff to Swansea in West Glamorgan, South Wales, for a fresh start after a break up.

But, before long, Samantha saw a very different side to Piecko when she “kicked off" at her girlfriend, after she had joined the couple for drinks. 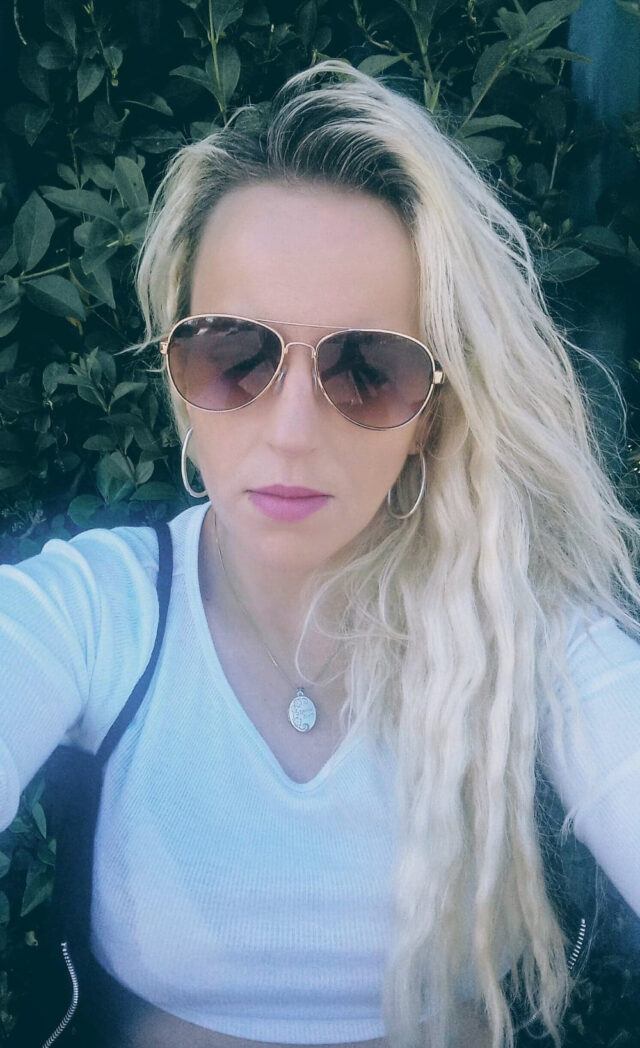 Figuring some time apart would defuse the tension between them after the row, Samantha offered Piecko's partner her sofa to stay on for the night, inadvertently triggering months of trauma at the hands of her former friend.

Despite Samantha's offer being purely platonic, Piecko was jealous that her girlfriend had stayed over. She retaliated by terrorizing Samantha, starting with throwing eggs and white paint at her front door.

“I tried to tell Sarah nothing had happened between me and her girlfriend, that we were just friends, that I wasn't even attracted to women and her jealousy was all in her own mind – but nothing was getting through."

“I was so terrified by what she'd do next that I would sit up all night, convinced she was going to burst in through the door any moment.

“She was so full of hatred when all I ever did was be kind to her."

Tensions between the pair reached a terrifying climax in September 2017, when Piecko brutally attacked Samantha outside a Swansea nightclub, leaving her with a gaping cut to her face and covered in bruises.

Appearing at Swansea Crown Court in January 2019, Sarah Louise Piecko admitted three counts of assault by beating, two of criminal damage, one of wounding and three of using threatening behavior to cause distress.

But when her violent behavior was dealt with by way of a 21-month suspended sentence, 240 hours of community service and a 10-year restraining order, Samantha was left reeling – feeling the punishment was nowhere near serious enough to reflect the gravity of her crime.

“All I wanted was for Sarah to be sorry, to be taught a lesson – but she's got away with it."

“I feel so incredibly let down by the justice system. What's worse is that I've had to move away and uproot my life, while she has been able to stay put.

“If she'd hit me just a little lower and got my jugular vein, I could have bled out within minutes. Yet, in my eyes, all she got was a slap on the wrist."

Life had seemed so much brighter back on a hot day back in June 2017 when Piecko had invited Samantha and her children round to cool off in her paddling pool. 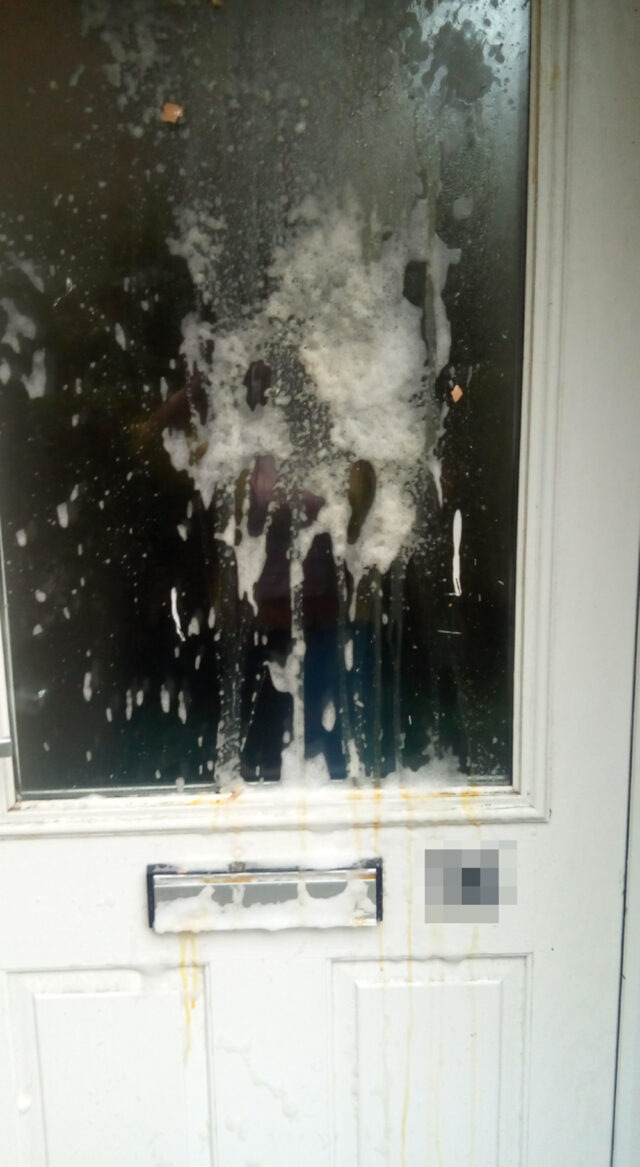 Samantha had moved to Swansea following a break up in late 2016 and had worried about being lonely, so when Piecko and her partner extended the hand of friendship, she was happy to take it and began spending more time with them.

But in July 2017 she saw Piecko's volatile streak when she argued with her girlfriend in front of her.

“Sarah had seemed nice enough before that. She would always make a fuss of my children, and have a laugh with me. I was lonely having just moved, and thought I'd found a friend."

“One day in July 2017, my children were with their dad for the night, so I invited Sarah and her partner round for a few glasses of wine. They ended up getting into this huge argument about God knows what.

“It really kicked off, so I thought it would help if I offered her partner my sofa for the night, to give them time to cool off. She ended up staying the next night too, as things were still up in the air.

“I was just trying to be a good friend – but that, to me, was the turning point." 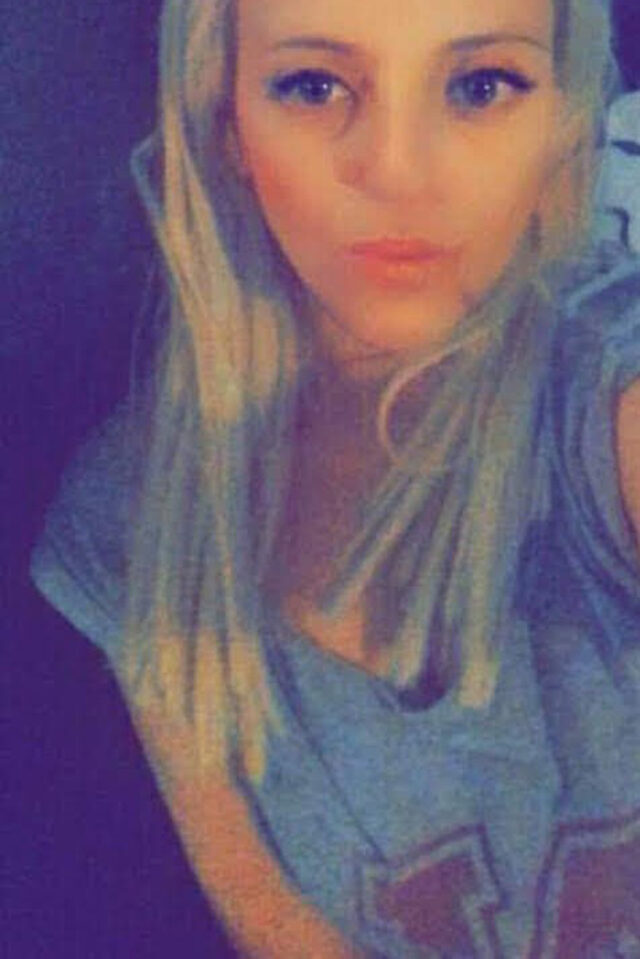 Samantha after the attack, with a visible scar on her chin (PA Real Life/Collect)
In the weeks that followed, Samantha said there was a dramatic change in Piecko's behavior towards her.

Gone was her bubbly, kind friend and in her place was a goading bully.

“I believe Sarah was very jealous. I attempted to make amends with her but nothing got through. A few days after her partner had stayed, I came home to find eggs had been pelted at my door. I was sure it was her and phoned the police, but there was nothing they could do when I had no proof."

“I asked her to clean it up. I'm a reasonable person and thought she would – but about five or six days later, I came home again to find paint smeared all over my door."

As time went on, Samantha became increasingly afraid, avoiding Piecko as best she could, but being neighbors, it proved impossible.

Then, the bubbling tensions between the pair finally boiled over in September 2017 when, while she had not initially been keen, Samantha decided to go out for a friend's birthday. 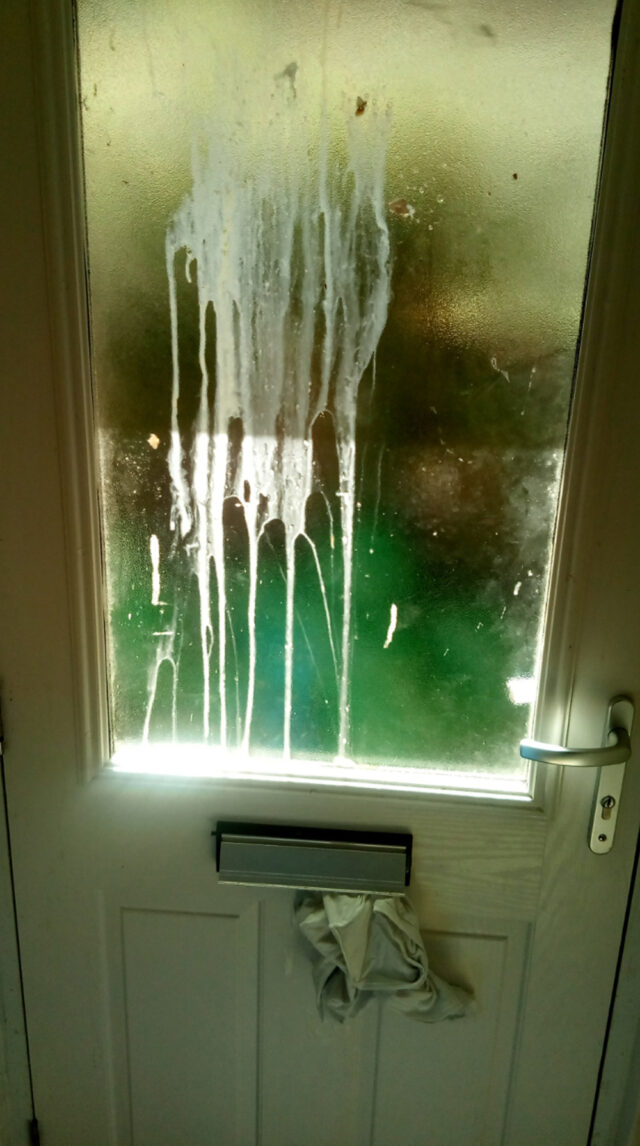 As her children were staying with their father for the night, she thought it would be an opportunity to relax and forget about the ordeal she had been facing. But, shortly after she arrived at her local pub, Piecko came in, flanked by a group of friends.

Much to Samantha's relief, the group eventually left – then she bumped into Piecko again later that night at The Rainbow Room's nightclub in Swansea.

Keen to avoid trouble, she decided to go home – popping out for a cigarette with a friend before leaving. 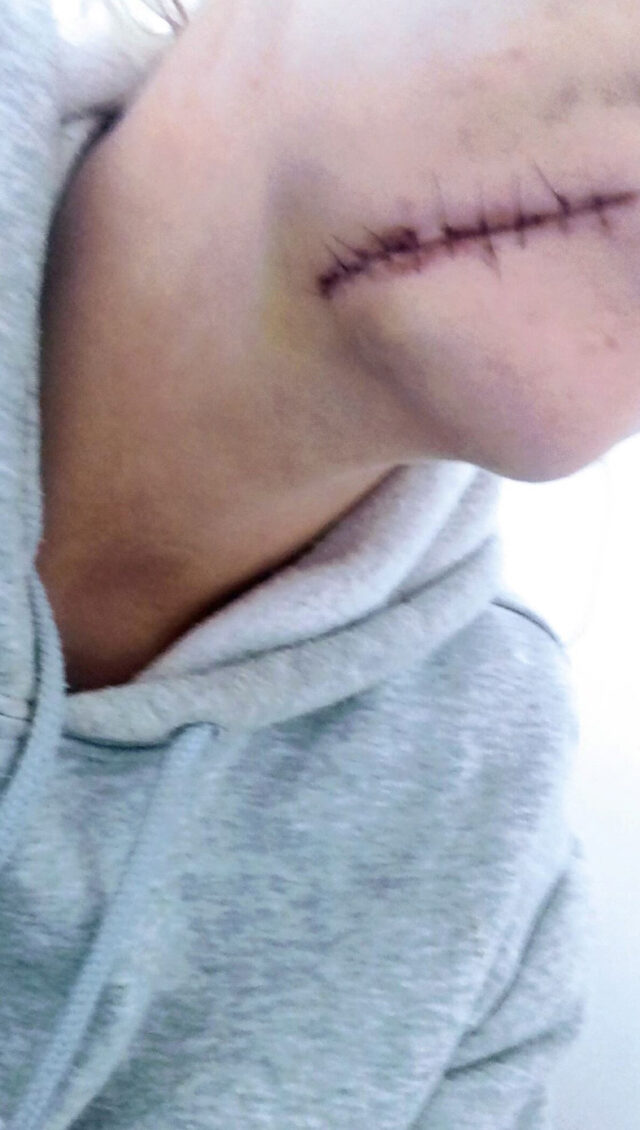 “I just wanted to get away from all the drama, so went outside, but then Sarah was suddenly running over, and the next thing I knew, I was down on the floor.

“She set upon me. All I remember is holding my face while she kicked and kicked.

“Someone eventually managed to get her off me, and I somehow got back into the club, where I collapsed and lost consciousness."

Paramedics were called and Samantha, who was bleeding profusely from her face, was whisked to Swansea's Morriston Hospital.

There, her dad Phillip was called to be by her side, as she had 21 stitches to close the gash on her face – 14 on the outside of her mouth, and seven inside.

Once home from hospital, she faced the heartbreaking task of explaining what had happened to her children, who could see their mother's scar, as plain as day. 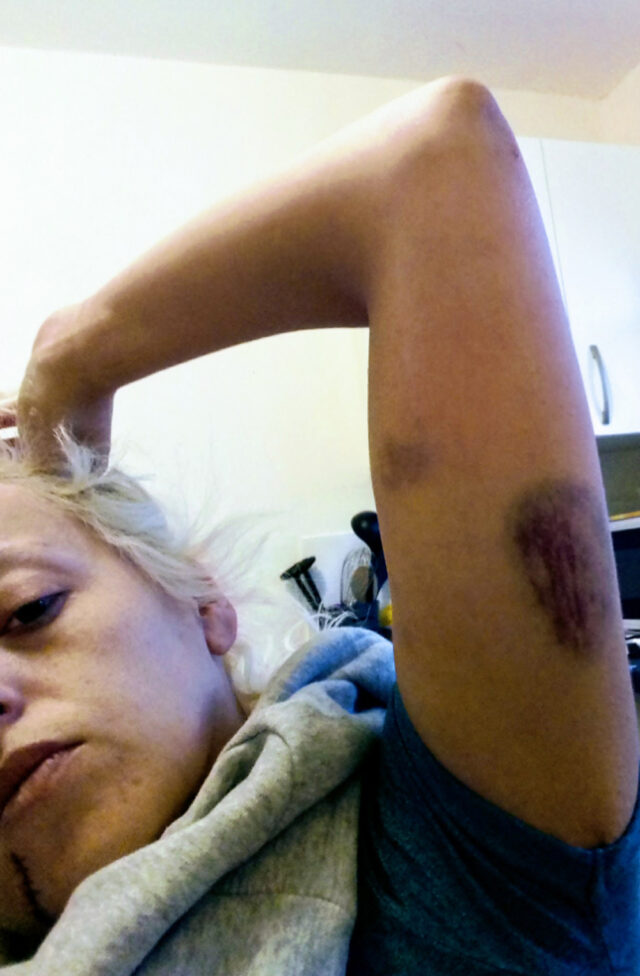 “Where the cut in my face was so deep, I literally had a hole I could squirt water through," she explained. “Dad was my absolute hero, I've no idea where I'd be without him.

“When I was back home, the kids knew something was up. I didn't want them to have to deal with the truth, so I told them I had tripped over and hit my face on a rock.

“Poor things could barely look me in the eye. It was horrible." 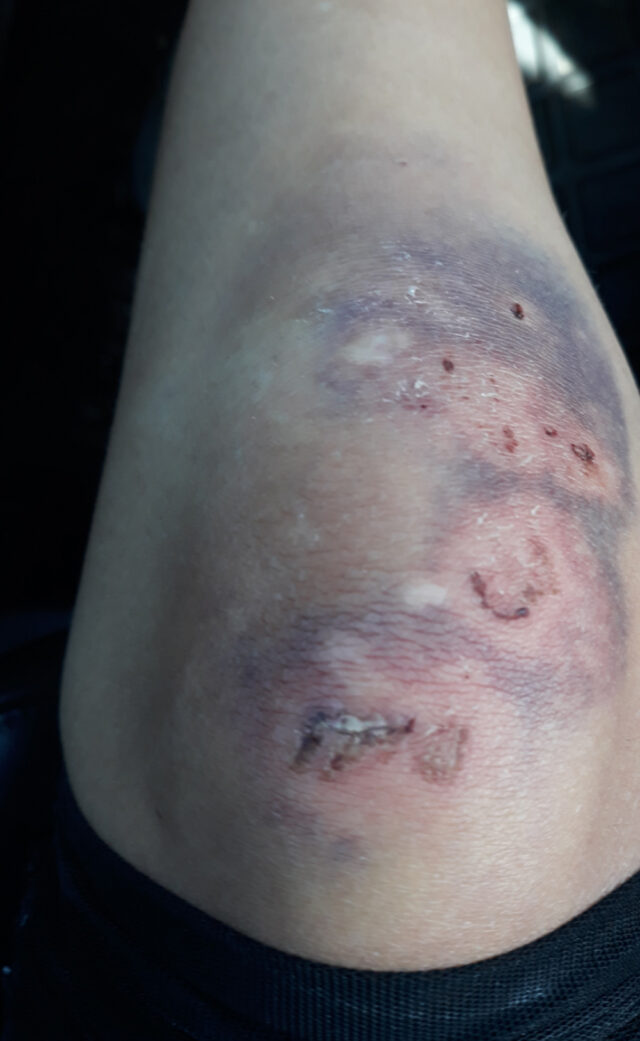 Meanwhile, Piecko soon turned herself in, but it still took a long time for the case to reach court.

Struggling to cope with what happened, Samantha said she even fell into the vice-like grip of anorexia.

“I couldn't control anything else happening – but I could control food," she said, admitting that she found it so difficult to eat she lost more than 40 pounds in a matter of months, going from 140 pounds to just under 98 pounds.

Finally, in January 2019, Piecko appeared at Swansea Crown Court, where she admitted a host of charges, but was spared jail – leaving Samantha feeling incredibly let down by the justice system.

Fortunately, thanks to her father's continued support and encouragement, she has at least reached a healthy weight again, after her he convinced her to seek medical help, is now determined to overcome her demons.

“I couldn't handle going to court, Dad went in my place." 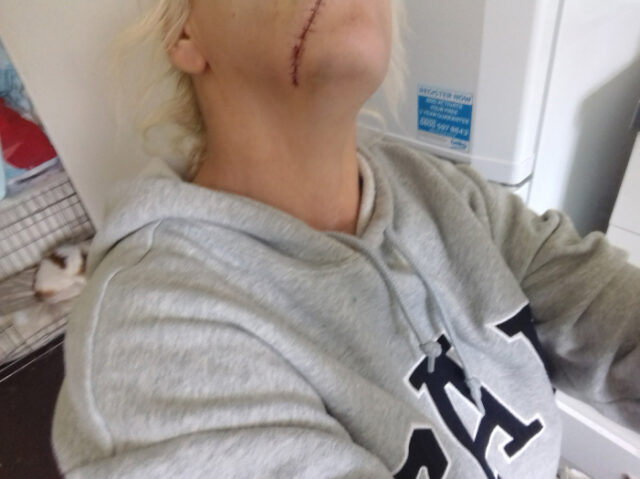 “We were so convinced she was going to prison, I thought she'd be looking at double figures in terms of a sentence, so when Dad rang to tell me what happened, I couldn't believe it.

“I thought, as the victim, I'd be treated better than this. It's really damaged my trust and faith in humanity.

“Still, I'm trying my best to keep remembering there is some good out there. As I didn't get closure in court, talking about it is my therapy now."