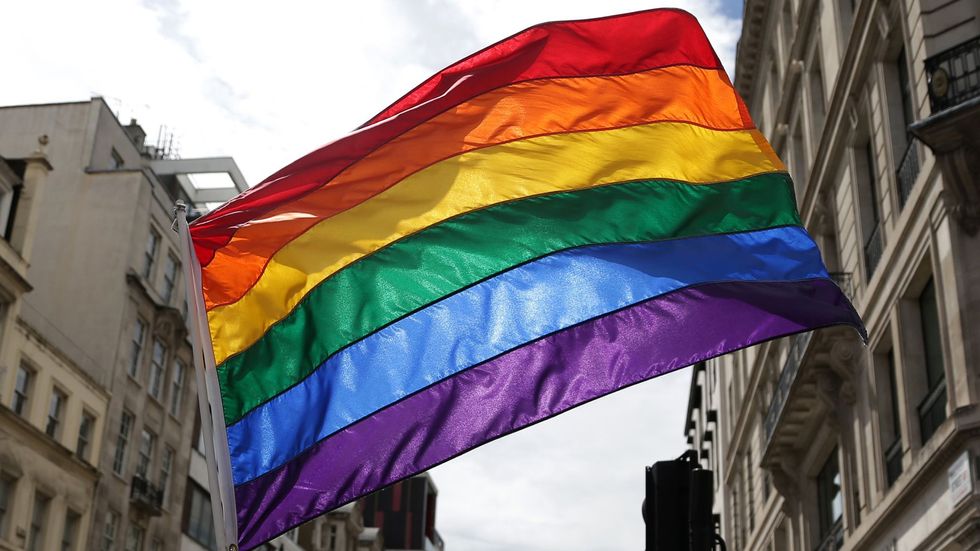 For people within the LGBTQ+ community, this year held a lot of moments to be proud of, from the advancement of human rights, to community members thriving, to inspiring celebrity role models. Memes took over Twitter and there were also news stories that will impact the community for years to come.

There's no room for all of the LGBTQ+ moments that took place over the year, but here are 10 of 2019's best viral spots, including animal stories, memes and defiant messages of hope.

Northern Ireland celebrated a vote passing same-sex marriages this year, with the law due to be finalized in January 2020. Other countries to mark this milestone in 2019 included Austria, Taiwan and Ecuador. Several indigenous tribes in the United States, including the Oglala Sioux Tribe, have also legalized same-sex marriage this year.

2. The penguins at London Aquarium became an unexpected part of the community.

London Aquarium's same-sex penguin couple Rocky and Marama became parents after they were given an egg that a female penguin in the colony was unable to take care of. The aquarium also revealed in September that the infant had become the first in its history not to have its gender assigned.

“While the decision may ruffle a few feathers, gender neutrality in humans has only recently become a widespread topic of conversation. It is completely natural for penguins to develop genderless identities as they grow into mature adults," Graham McGrath, general manager at the aquarium, said.

3. Trans and non-binary candidates from across parties ran during the general election.

Some people have called me 'brave' for standing for parliament as a non-binary person, and I'd like to put that ide… https://t.co/winwPwCFXX
— Thom Kirkwood (@Thom Kirkwood) 1573507951.0

None of the trans or non-binary candidates who stood were successful, however with 45 out LGBTQ+ MPs elected in December, the UK now has the highest number in Parliament than any other government in the world.

“I think we're starting to be properly represented; people are starting to realize that being trans or non-binary isn't going to hold them back," Thom Kirkwood, who stood for Labour in Richmond, Yorkshire, England, said.

In June, Virgin Atlantic ran its first Pride Flight from Heathrow to Newark, to coincide with World Pride as it marked the 50th anniversary of the 1969 Stonewall riots.

The flight featured an all-LGBTQ+ crew and pilots and was hosted by Netflix star Tituss Burgess.

Also on the journey was Tree Sequoia, who was working as a bartender in New York's Stonewall Inn during the riot.

5. Pride Month threw up some incredible memes on Twitter.

Speaking of World Pride, Pride Month in general gave the community a huge opportunity for memes and fun on Twitter. During June, social media was awash with GIFs celebrating the community and highlighting the significance of the month.

Pride month was also defiantly celebrated by LGBTQ+ people in areas where Pride marches are banned, including demonstrations in Cuba, Kenya and Uganda.

6. For some, the entire year was re-branded as #20BITEEN.

In 2018, the term 20GayTeen was coined by pop singer Hayley Kiyoko, aka “Lesbian Jesus."

The term took off, and was adopted by social media users to celebrate the best moments of LGBTQ+ progression and pride last year. However, bisexual Twitter users have taken this year to the next level, coining #20BITEEN to celebrate the bi community's own achievements and jokes.

7. Protests against equality lessons outside a Birmingham school were permanently banned.

Demonstrations against LGBTQ+ inclusive education were permanently banned outside a primary school in November. Anderton Park school in Birmingham, England, was giving LGBTQ+ relationships education as part of its curriculum, which some parents attempted to halt with protests.

Andrew Moffat, assistant headteacher at Parkfield Community School, which was also protested against for its inclusive lessons, was invited to lead the Birmingham Pride parade in May.

“Society has made such giant strides generally in terms of LGBTQ, that as football people we've got to ask why does the issue of homophobia persist within our community and the professional game and challenge that," Souness said. “I'm here today as an ally and to bring attention to members of the LGBT community in the amateur game who are leading the charge in that conversation."

With no openly gay or bisexual players currently in the Premier League, Souness' comments, as well as the rainbow laces campaign alongside charity Stonewall, bring much-needed LGBTQ+ visibility to soccer.

9. A Hallmark video featuring a same-sex wedding was pulled…and then put back up again.

The Hallmark Channel revised its decision to pull an advert featuring a same-sex couple. The ad for wedding registry and planning website Zola features two women kissing, and was pulled from the channel following criticism from an anti-LGBTQ+ group.

After releasing an apology, the network said it will be working with charity GLAAD to better represent the community.

“LGBTQ+ people are, and will continue to be a part of advertisements and family programming and that will never change," Sarah Kate Ellis, president and CEO of GLAAD, said in a statement.

10. Lastly, RuPaul's Drag Race came to the UK for a British edition.

After 11 seasons of RuPaul's US show Drag Race, the crew finally came to the UK to crown a British queen.

The Vivienne was appointed the UK's first Drag Superstar and is heading to Hollywood to star in a digital TV series. Other finalists included Twitter favorite Baga Chipz and Divina de Campo.

The second series of Drag Race UK will take place in 2020, with casting already closed.