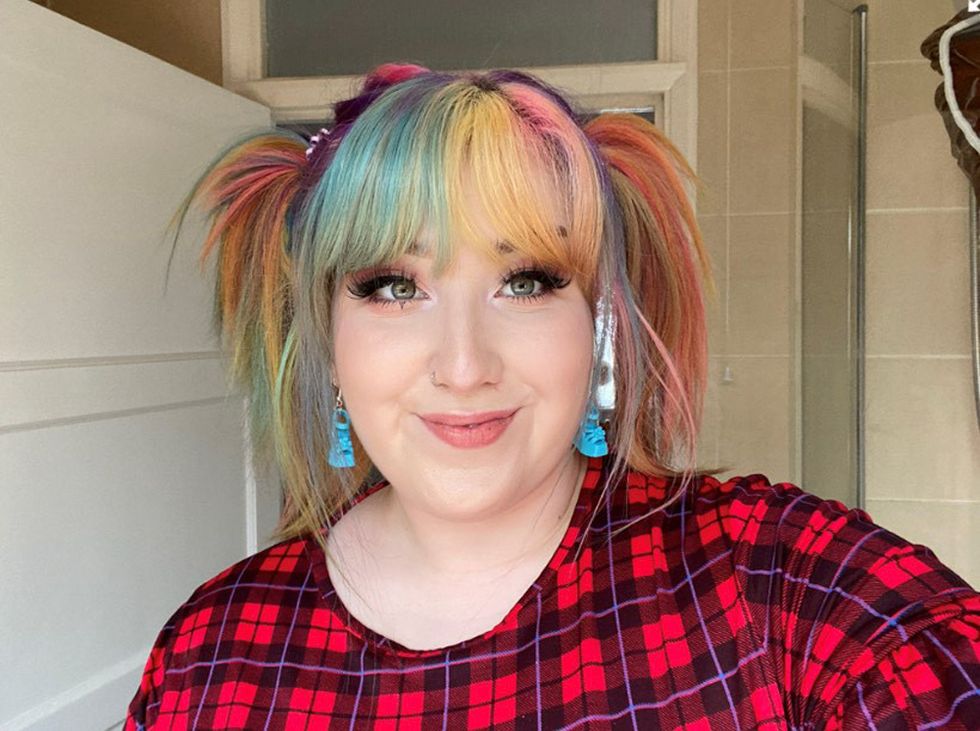 A student who was so phobic about food that she only ate bread and ready salted potato chips for a decade is now happily tucking into all the meals she feared, thanks to a single hypnotherapy session.

From the age of three, it became clear that Izzy Cole's aversion to most food was far more than picky eating, as she retched or became consumed by terror at the very thought of eating anything from sausages to satsumas.

Largely existing on bread rolls and plain potato chips, her teaching assistant mum Kim, 51, was so concerned about her poor nutrition that she took her daughter back and forth to doctors, who simply branded her “fussy."

Refusing to give up, in 2015, Kim read about a London-based hypnotherapist specializing in food phobias and took Izzy, now 19, of Gwent, South Wales, for a two hour session—after which she feasted happily on chicken sandwiches, fruit salad and spaghetti without flinching.

“People don't understand ARFID. I was told so many times I was just being fussy, or doctors would say, 'Just eat'—but it's not that simple. I desperately wanted to eat and to join in with my friends when they were getting takeaways or having lunch together, but I couldn't."

“It was like a phobia. Most food would give me a sinking feeling and even the thought of trying it made me gag. It got so bad that I had bread rolls and plain potato chips for virtually every meal."

Izzy as a child, when her food phobia was particularly bad (PA Real Life/Collect)

Izzy, who is studying English and creative writing at university, had no issues with food until she turned three, when she suddenly became far more particular about what she would and would not eat.

But no single event triggered her phobia, despite the eating disorder charity Beat saying traumatic experiences like choking or vomiting can often cause ARFID—which may be sensory-based, meaning sufferers can be averse to certain textures, tastes, smells and appearances, or may only eat food kept at a specific temperature.

“My ARFID started from nowhere. I have no idea what caused it."

“I've always been quite an anxious person, so I wonder if the two co-exist. It would be a cycle—I'd get anxious about eating and then feel worse because I couldn't eat. I felt like a burden and like nobody understood me."

With her anxiety around food steadily worsening, the list of things Izzy could not bear to eat became increasingly restricted as the years passed.

“My worst thing was chicken. No matter how much I wanted to, I couldn't bring myself to bite into it."

“I was very particular with texture. I preferred crunchy things like potato chips, as anything too wet just felt like I was eating mushy baby food. I couldn't stand pasta, or anything with bits in, like a yogurt or juice."

Between the ages of 11 and 13, when she started secondary school, things became particularly bad for Izzy, who experienced increased anxiety and also suffered with regular migraines—although she remains unsure if they were because of her poor diet.

“It began to affect me socially. I was at the age where friends are very important, but I felt like I could never join in."

“If they were going for food together, I just wouldn't go, or if we were having a sleepover and getting a takeaway, I'd have to sit it out as I knew I wouldn't be able to eat. I felt like I was constantly annoying people."

“Thankfully, I had an incredible support system in my family. My mum would always cook for me and try to get me to eat the same meal as everybody else, but was understanding when I couldn't."

“I could tell she was upset and worried about me. She took me to all sorts of doctors and counsellors and they all said the same thing—essentially that I was just picky."

Then, in summer 2015, Kim saw a TV segment about Felix Economakis, a psychologist and clinical hypnotherapist, who previously worked for the NHS, but now has a private practice in northwest London and specializes in food phobia and ARFID.

Hoping he could help save her daughter, she booked an appointment for a two-hour session and the following month, Izzy and her family travelled down to London to meet him.

Felix explained what ARFID was and how sufferers can constantly have the same meals, may only eat food of a similar color, can become anxious at mealtimes, have difficulty recognizing hunger and nutritional deficiencies, like anaemia.

Izzy as a child, when her food phobia was particularly bad (PA Real Life/Collect)

“It was the first time I'd ever heard of the condition. For so long, I'd felt alone, like the only person in the world who had such a difficult relationship with food. But finally, I realized that I wasn't just fussy—I had an eating disorder."

At her appointment, Felix and Izzy discussed her history with food, before she was given hypnotherapy.

“I remember Felix telling me that, because my issues had started when I was three, I had a three-year-old Izzy inside me trying to protect me from all the food I thought was bad and would make me sick."

“He told that Izzy, 'She doesn't need you to protect her anymore'."

“He'd asked me to bring along my most-feared food types to try after the session. I can't explain it, but something in my mind just clicked and I wolfed down a chicken sandwich and a yogurt with fruit without a second thought."

“I didn't retch and that dread had finally gone. I stood outside eating pineapple, crying my eyes out in the middle of the street. We were all so happy."

That night, Izzy and her family celebrated with a slap-up Italian meal and she ate tomato bruschetta and spaghetti—food that would previously have seen her overcome with panic—quite happily.

Since then, the range of food she eats has expanded enormously and she finds that flavors and textures she once could not stand are now amongst her favorites.

“Funnily enough, I absolutely love chicken now. I eat pretty much anything these days and I'll at least try a different kind of food once to see if I like it. I don't worry, or even think about things like texture anymore."

Keen to make people aware of ARFID, Izzy aims to offer hope to other people whose life is being controlled by the condition.

“People will trivialize what you're going through and tell you that you're just picky or difficult—but ARFID is real and it's serious. It affects your life in ways you don't even realize."

“I wanted more than anything to eat proper food like everybody else for so long—and now, thankfully, I can."