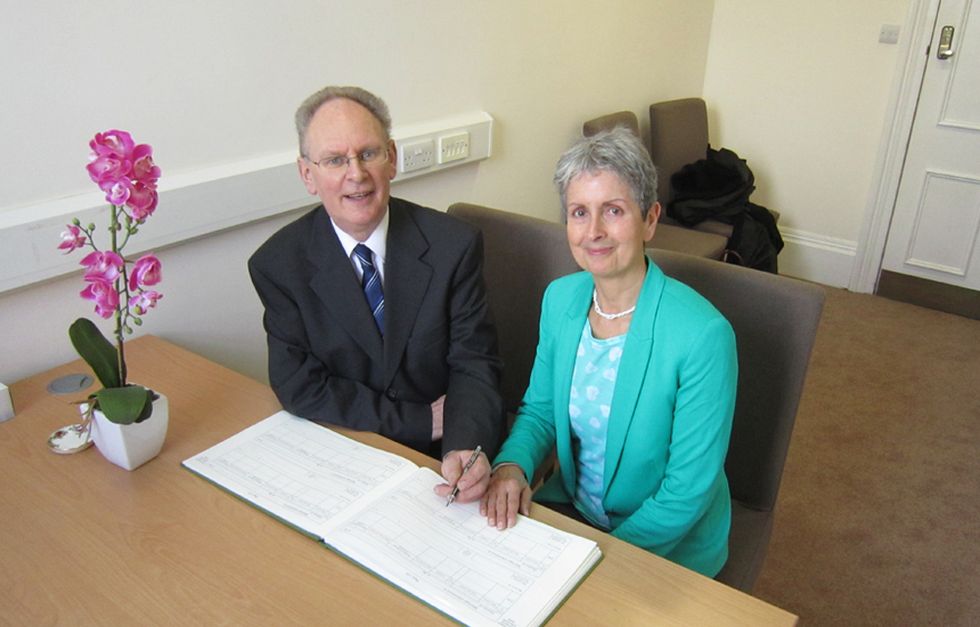 A woman whose film-buff husband converted their garage into a tiny cinema vowed to honor his memory after he died by opening its doors to the public—and now runs one of the UK's smallest movie theaters along with her son.

Working for the BBC, first as a sound engineer, then a producer, Barry Littlechild loved nothing more than the magic of movies.

So, when he and his family moved from Tonbridge to Tunbridge Wells, Kent, England around 20 years ago, the first thing he did was set about converting their garage into a 16-seat cinema.

At first, he would hold regular screenings for his family and friends to enjoy—but, after he tragically died of prostate cancer in April 2016, aged 69, his wife Olga, now 73, and son Wayne, 38, decided to carry on his legacy.

The pair now run what is thought to be the one of the UK's smallest cinemas, and have even recently won an award for their neighbourly efforts.

“When we moved to Tunbridge Wells, literally the first thing Barry did was get to work on the cinema."

“He used to do film clubs for his friends, and people he knew through the industry."

“When he died, it was such a huge shock, and so awful to lose such a big personality."

“It wasn't just the family grieving—the people who had been coming to his cinema all those years were deeply upset too."

Olga and Wayne show a mix of old and new films, as well as cartoons and documentaries (PA Real Life/Ying Shi Caterham Photography)

“So, Wayne and I wanted to carry it on, and do something for the community."

“Loneliness can be terrible, especially in older people when you get to that age where you start to lose your friends, but hopefully, by coming to watch a film and have a natter, there are a few people out there feeling a little less lonely."

“Dad spoke to me about the cinema when he was ill and asked me to take it over from him. He showed me how to do everything while he was still able."

“The place holds so many memories for me that the last thing I wanted was for it to gather dust."

Having worked in the TV industry all his life, Barry knew everything there was to know about film.

Growing up, Wayne has fond memories of settling down to watch westerns or black and white classics on the sofa with his dad.

Moving to the leafy Kent town of Tunbridge Wells, Barry was keen to have his very own corner of Hollywood in his new home, and so converted the garage to a cinema.

Through the cinema, we have this lovely community where people can meet, have a laugh, have a chat and get lost in a film together.
Olga Johnson

“He had all the proper equipment from his sound engineer days, like a Dolby sound system."

“He had a projector and managed to get hold of some reels of film, which he would stitch together so he could play it at a screening. He had all the techy know how. In time, though, everything in his cinema became digital."

“He even got proper cinema seats that he salvaged from a theatre in Soho, central London, that was closing down. They're so old that they have ashtrays in the arm rests from when you used to be able to smoke indoors."

Olga and her family shared many a happy memory in the cinema, taking in classic pictures at Barry's screenings, with his favorite film being Cinema Paradiso.

But, they were dealt a heartbreaking blow when Barry was diagnosed with prostate cancer.

After fighting it for around two years, Olga said, he passed away at home, his wife and son by his side.

With just 16 seats, the cinema is thought to be one of the smallest in the UK (PA Real Life/Collect)

“Barry's cancer was really quite aggressive, and the last six to eight months were especially hard. He was sedated a lot, so I hope he wasn't in too much pain."

“He was very brave. Wayne and I were with him at the end, which was nice—as nice as a death can be."

In the wake of Barry's passing in April 2016, there was “no question" in Olga and Wayne's minds that they would continue on with his beloved cinema.

Opening its doors to the public, they have since been running two fortnightly film nights, with afternoon shows on Tuesdays and evenings on Wednesdays.

As well as a 1000-strong DVD collection, they also have several films available via Netflix, and stock documentaries and cartoons too.

“People can request films. If they want to see something in particular, we'll add it to the list and I will order it for them, usually from Amazon. We show new films, and lots of old classics too, the kind Dad liked."

“We get such a mix of people, from pensioners and mums with their kids in the daytime, to people finishing work in the evenings."

Explaining that they do not charge admission—instead asking that people simply donate to Nourish Community Foodbank, which she set up six years ago and helped to feed 6,300 people last year alone—and also provide free refreshments, Olga added:

“Tunbridge Wells is a really mixed community, and people think it's full of enormous wealth."

“But while there is wealth in some places, there is also deprivation, so it is great to be able to provide people with a place to go and take in the magic of a movie for free."

When Barry died, it was such a huge shock, and so awful to lose such a big personality. It wasn't just the family grieving – the people who had been coming to his cinema all those years were deeply upset too.
Olga Johnson

“Barry was such a people person, so he'd love to see people enjoying themselves. Wayne and I have met people we would never ordinarily have got a chance to speak to through this."

And, in a fitting tribute, there are nods to Barry all over the pocket-sized theater.

“We have pictures of Barry and all the film and TV people he met over the years on the walls, and some autographs too."

“My favorite thing, though, is our welcome mat. He was such a nice man, but when it was time for his friends to leave the cinema back when he did his film nights, he'd tell them, 'Bugger off!'"

“If I said that, people would be offended, but somehow, he could get away with it because everyone liked him so much."

“Shortly after he died, I got an advert emailed to me about personalised welcome mats, so I decided to have one made saying, 'Bugger off!'"

“That's what our guests see when they leave. It's little things like this that make it feel like Barry is still here with us, in this house. All his favourite films are included in our cinema programmes, too."

In order to let the local community know about what's coming up at the cinema, Olga and Wayne religiously use Nextdoor, the UK's largest private social network for neighborhoods across Europe.

Regularly posting to promote their screenings, they say it has enabled them to connect with people in their town who they may not previously have met.

And, they were delighted when, earlier this year, a friend and long-time visitor to the cinema nominated them for a Good Neighbour Award 2019. After sifting through hundreds and hundreds of entries, Nextdoor crowned Olga and Wayne one of six winners.

“We weren't expecting to win, so it was amazing. It's really important to be a good neighbour, and we are lucky enough to be surrounded by good people. The cinema is a wonderful way of bringing people together."

“I don't think we could survive without our neighbours. They're always there to help."

“Nextdoor has put us in touch with so many great people. Now, through the cinema, we have this lovely community where people can meet, have a laugh, have a chat and get lost in a film together."