A remarkable mum has spoken of her determination to help others through online support groups, despite battling a rare condition that leaves her dicing with death whenever she and her husband make love.

Sam Deakin, 34, of Porthcawl, South Wales, has Fowler's Syndrome, which makes it difficult or impossible to pass urine, because the sphincter muscle in the bladder cannot relax.

It has seen her go from one extreme—where she would pass water 16 times a night—to needing assistance to go at all.

Currently fitted with a catheter—a tube passed into the bladder to drain urine—if she and her husband, Edward, 35, who she started dating at 14 and is now her carer, have sex, she risks being hospitalized with a life-threatening infection.

“My husband looks after the kids and he is my carer too – he changes my catheter and sorts out my medication and he does all the housework that I can't do."

“I take my hat off to him. It's not easy for people to see their partners like this. Not every couple gets through it."

“Edward has been my rock, supporting me mentally and physically. His humor keeps me going and he still compliments and flirts with me despite all of this – which keeps the spark going between us."

For Sam – who despite her condition, continues to run the family business with Edward—difficulties with intimacy are just one of the many side effects of Fowler's, which typically hits women in their 20s to 40s.

“I'm never without an infection. My body is always fighting."

“Most days I can't even chop vegetables for dinner, change the beds or walk for more than five minutes." 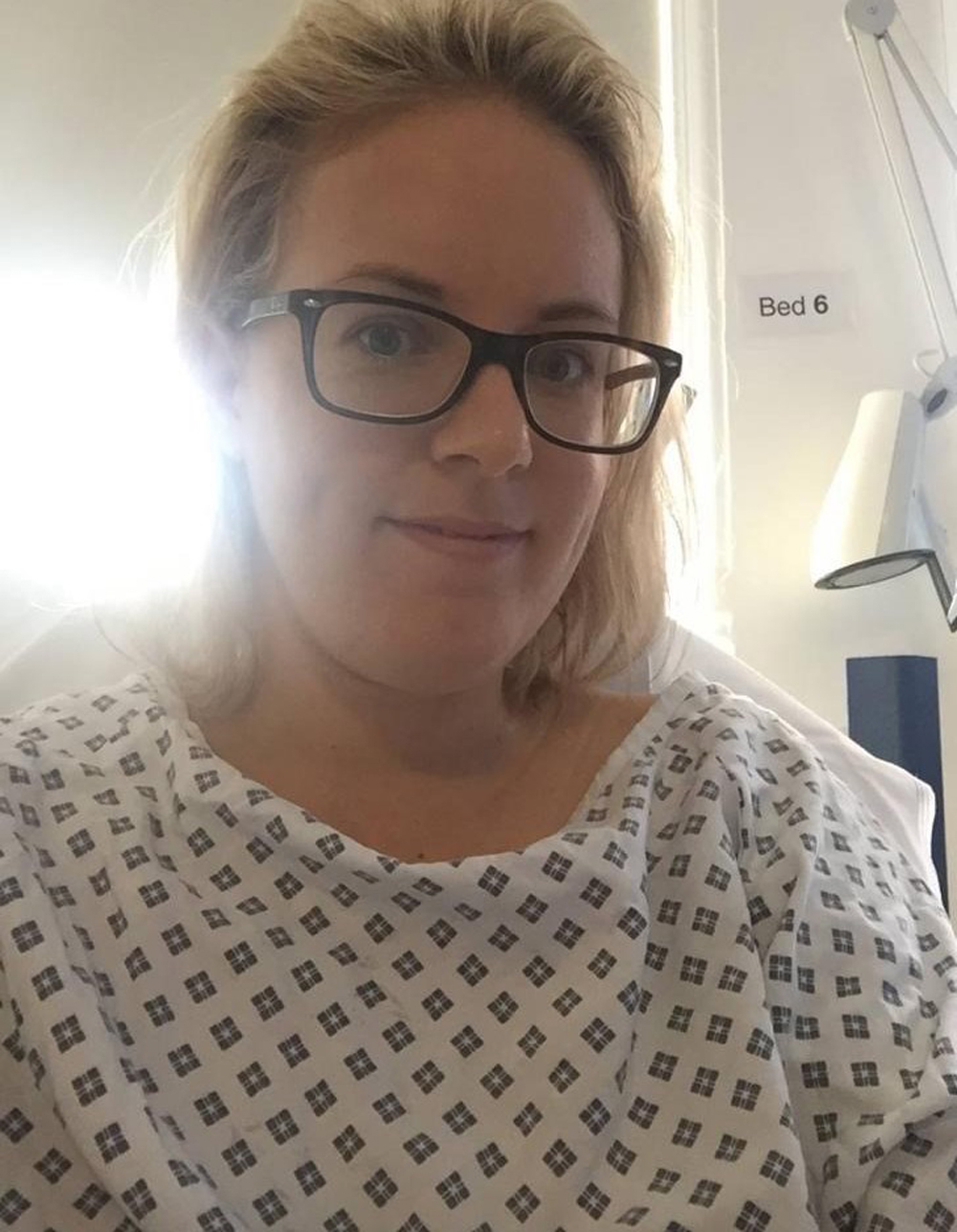 “All of these activities can trigger a muscle spasm in my arm, which sets everything else off and within 10 minutes, I'll be having an agonizing spasm in my bladder—which is like being in labor."

“I spend five to seven days each month in hospital, hooked up to a drip of antibiotics, as I get so many terrible bladder infections."

Sam, who has two children, Edward, seven, and George, five, said her problems started as a child, when she was dubbed a 'hypochondriac' for complaining of constant stomach pain and water infections. 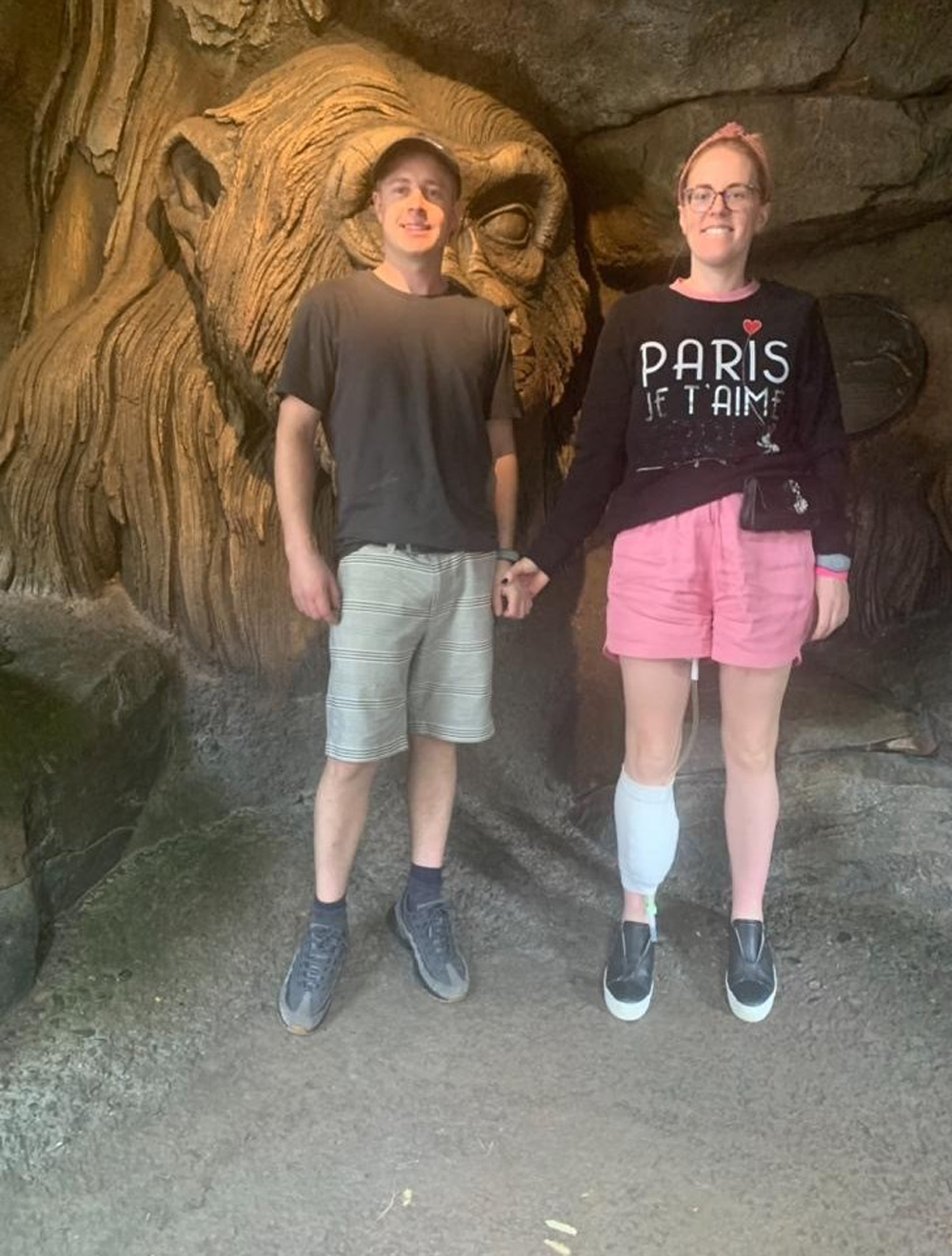 Hypermobile, meaning her joints were more flexible than usual, and “sickly," she was constantly in and out of hospital, because of stomach pain and water infections.

A keen gymnast when she was only three, when she hit puberty at 14, she was forced to quit because the pain from spasms in her bladder, calves, feet and stomach became unbearable.

“Puberty was the big trigger for me," said Sam, who uses a mobility scooter and a stick. 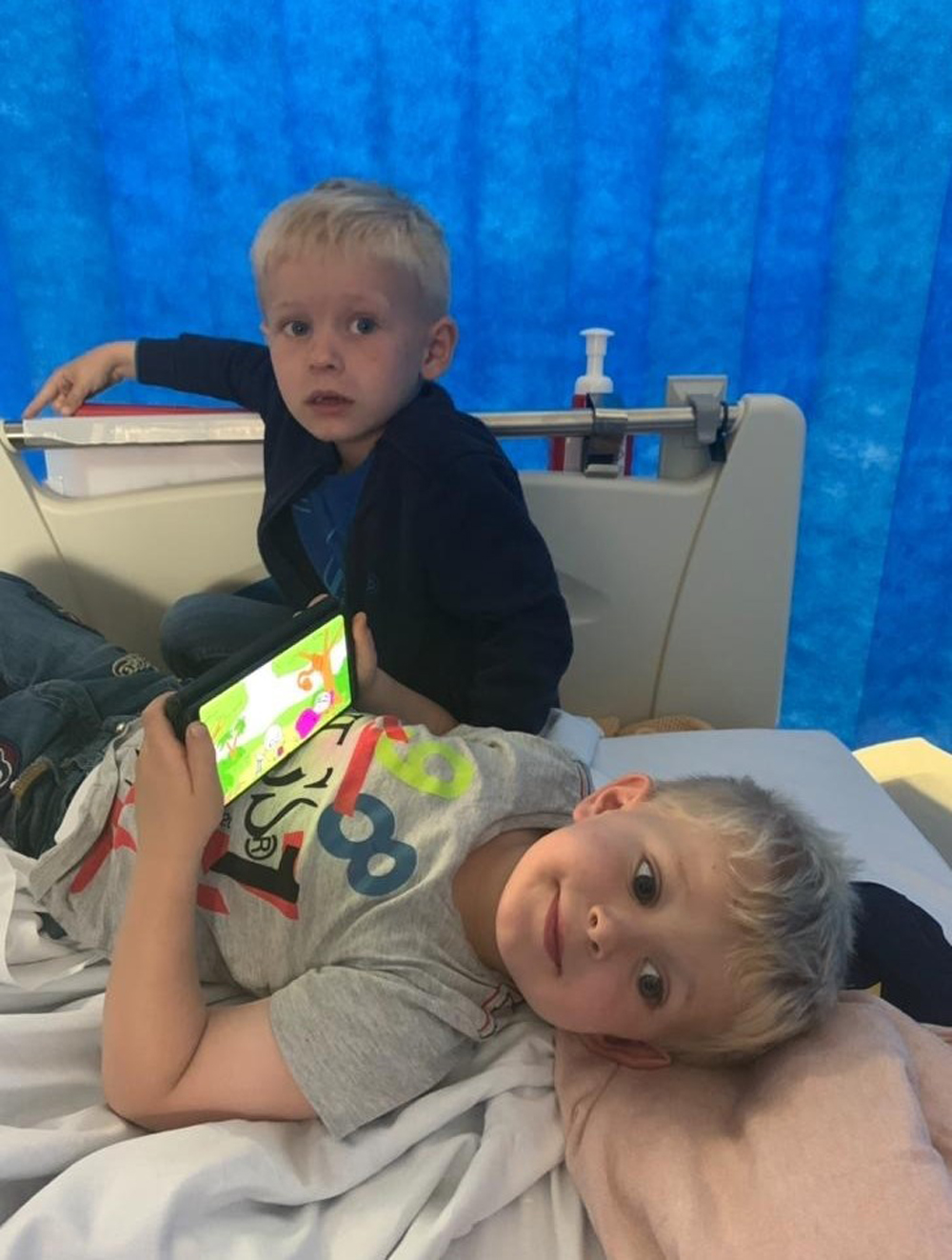 “Early on in my childhood, my problems were dismissed as growing pains. But the pain went through the roof when I started my periods at 14."

“I would be taken to hospital and put on morphine."

“There were days when I could not put one foot in front other because of the pain. I always looked pregnant, too, because my stomach was so swollen."

From puberty onwards, Sam also had a constant urge to pass water—going to the toilet every 20 minutes during the day, at least 16 times at night and barely sleeping.

“I could constantly feel all this heavy liquid sitting in my bladder."

Despite the frequency of her bathroom visits, she never passed enough water to empty her bladder completely. 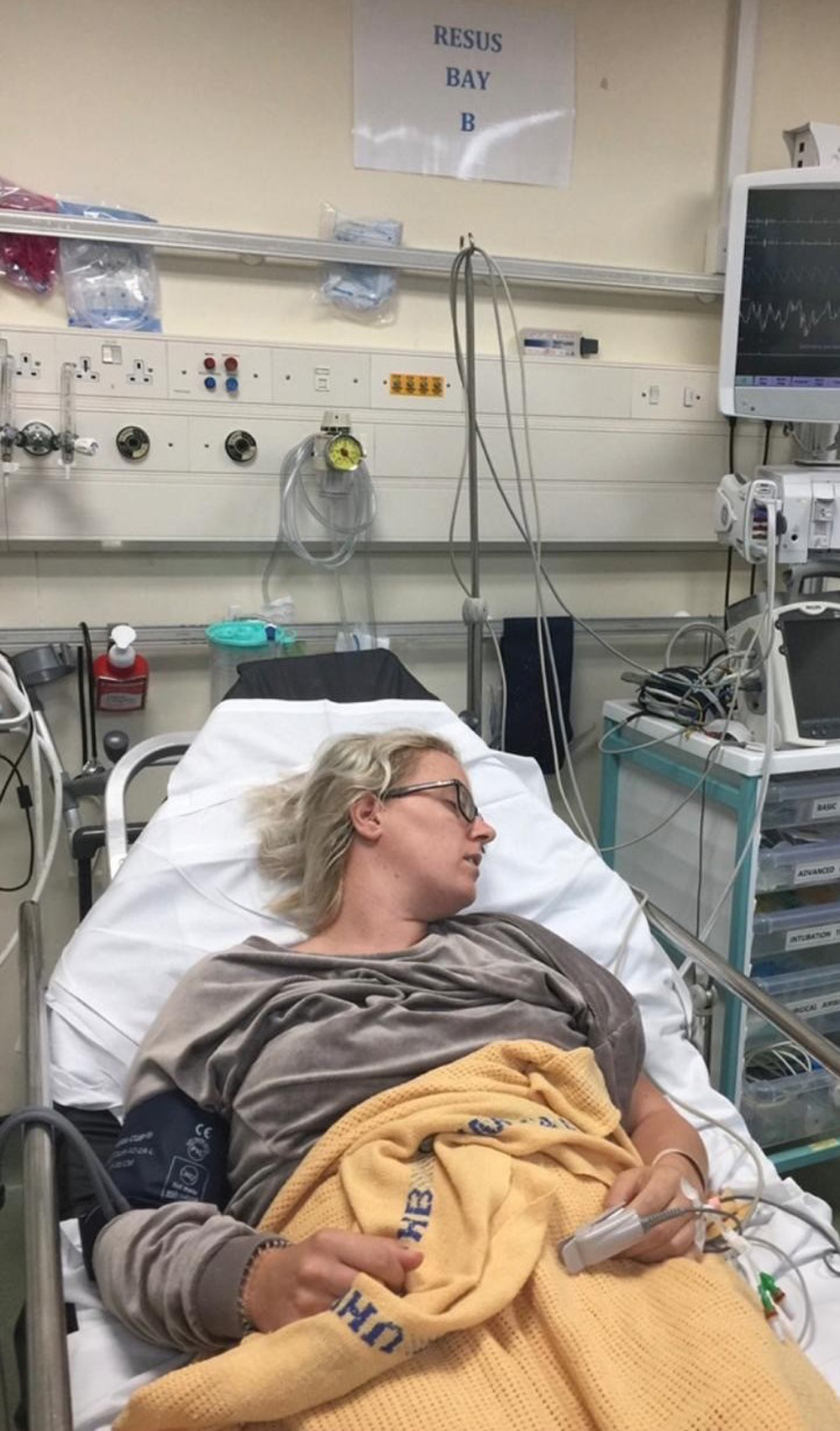 “The rest would sit in there, stagnate and cause infections. I've had so many cameras down my throat—because my stomach would swell so much and doctors would try to find out why."

“Often, they thought it resulted from an ulcer or an appendicitis, but they found nothing."

“I think doctors assumed it wasn't a bladder issue, because I was so young, but the pain I experience is as bad as labour and actually makes me faint." 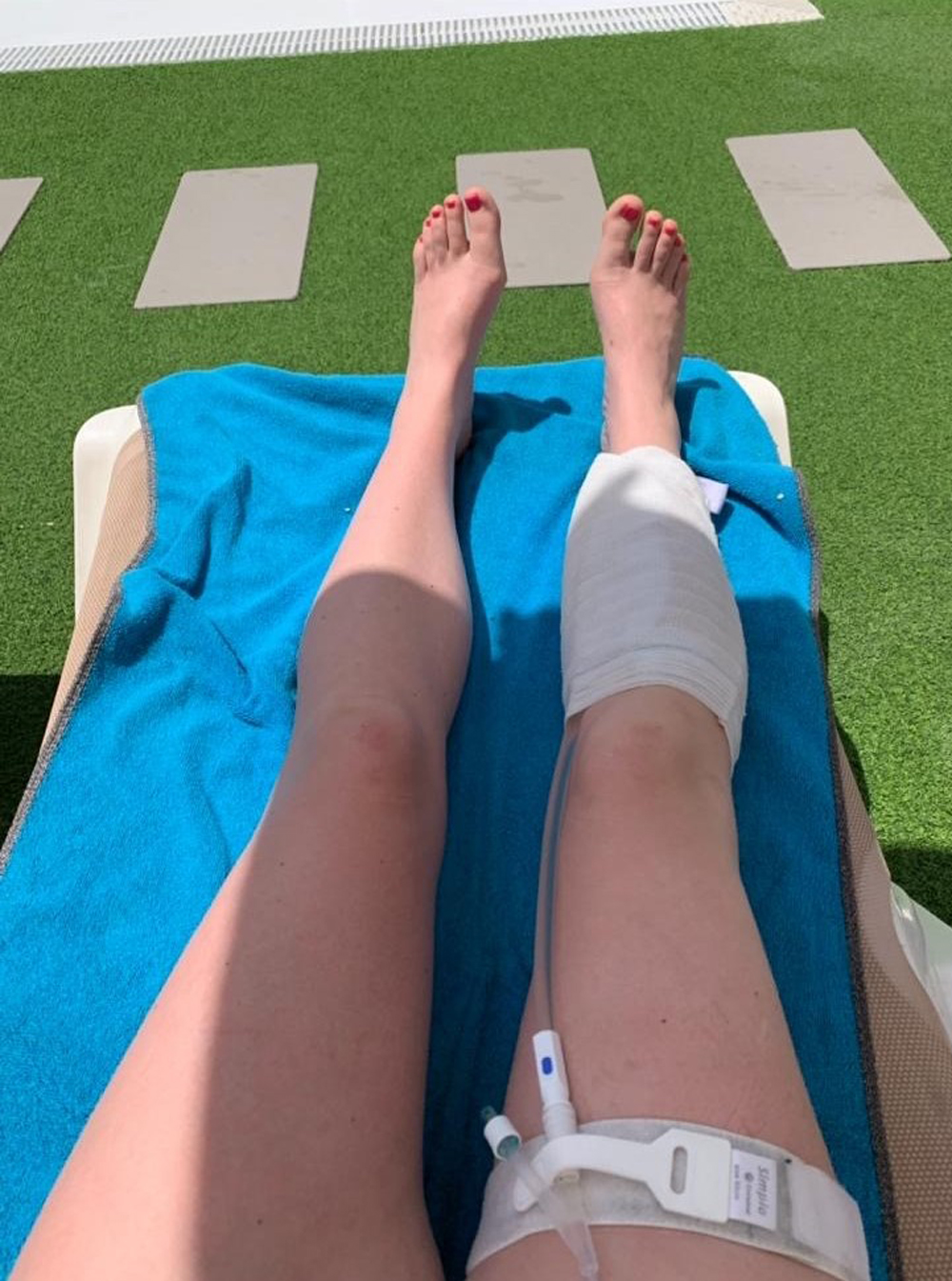 Alarm bells really rang when Sam gave birth to her son, who is also called Edward, and doctors emptied three liters of urine from her bladder—marking a turning point in her treatment.

“I had a procedure, which wasn't a C-section, where they cut me open and had to pull Edward out with both hands and emptied three liters of urine from my bladder."

Despite her health concerns, she had no problem conceiving.

At the time, doctors knew she was suffering from partial urinary retention and had fitted her with a temporary catheter while she was in labor. 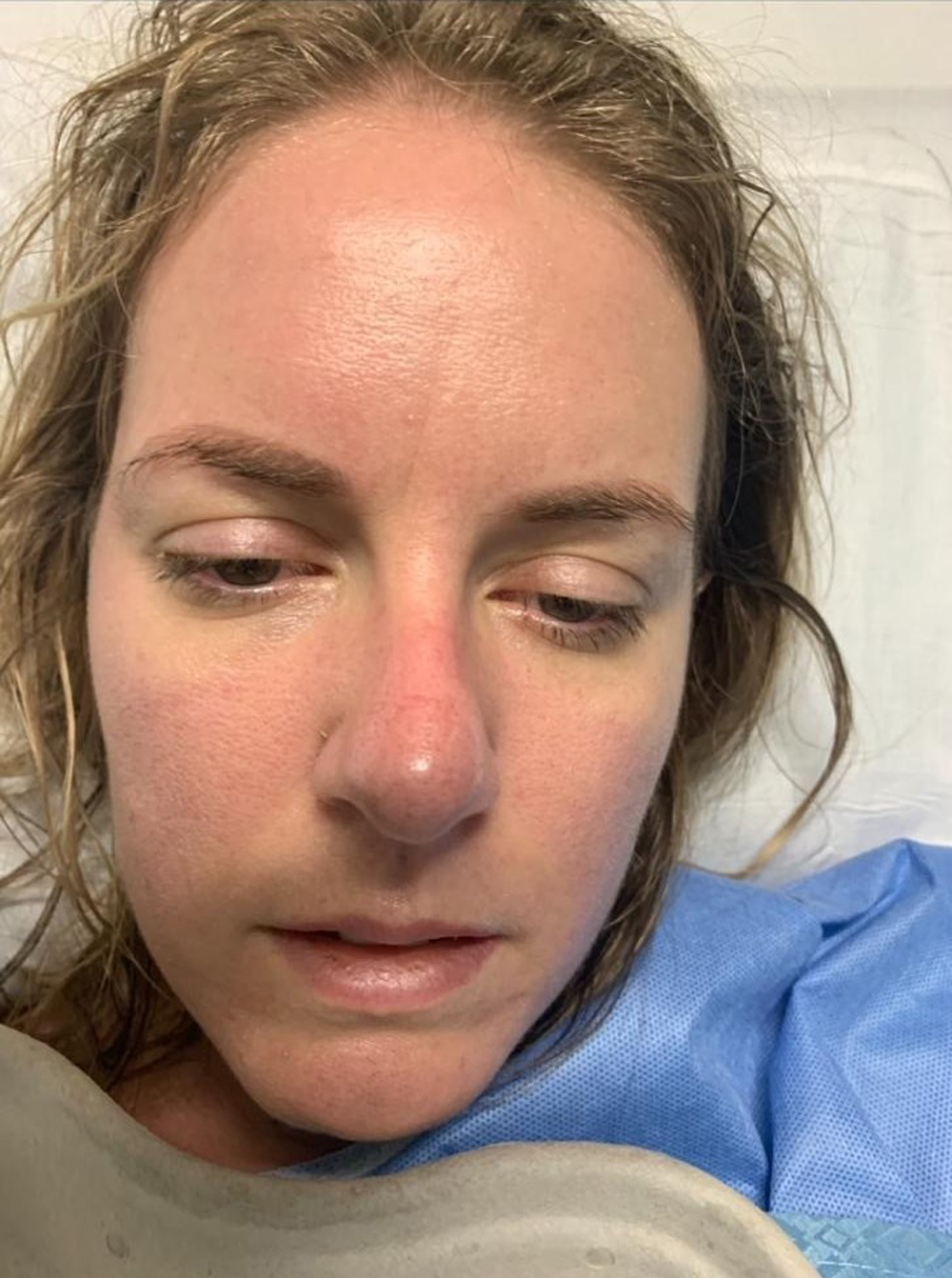 Concerned by the sheer volume of urine retained, doctors urgently referred Sam to a urologist to investigate further. She was put on prophylactic antibiotics to manage her water infections, but after a number of tests, doctors could not pinpoint what was wrong with Sam.

Then, when George was born in Princess of Wales Hospital in Bridgend in August 2014, the same thing happened, where she was rushed to theatre and George had to be pulled out.

“The same obscene volume of wee came out."

Continuing to mystify doctors, by the end of 2014, Sam was taught to self-catheterize a number of times during the day, but it still took another two years until she was diagnosed.

“I was having an appointment with my consultant in Wales, when another doctor walked in, overheard our conversation and asked, 'Have you ever heard of Fowler's Syndrome?'"

“Neither of us had, so he told us to Google it and it literally described everything I had been experiencing all my life."

“Sometimes, I thought the pain was all in my head, so the moment I got my diagnosis, a huge weight was lifted off my shoulders."

Then, in September 2016, her problems accelerated.

“I was at a Stereophonics concert in Cardiff with Edward and family, as it was one of my 'good' days."

“I had a few drinks, but had a bad reaction to alcohol—anything strong or acidic which touches my bladder sets off my spasms."

“Then, when we got home, as I walked up the steps to the front door, I fell backwards and hit my back."

“I thought I was ok and I went to bed, only to be woken by Edward, who said I had wet the bed. I tried to go to the toilet after and nothing was coming out."

“Horrified, we knew something was seriously wrong and I was rushed to hospital."

“It transpired that when I hit my back, I damaged my bladder—resulting in full, rather than partial urinary retention, so I couldn't wee at all."

Doctors fitted Sam with a foley-urethral catheter—a short-term solution until the end of 2017, when she was fitted with a sacral nerve stimulator (SNS), a device similar to a pacemaker, which is fitted in the lower back and corrects the communication problems between the brain and the bladder muscles, which have clamped shut. 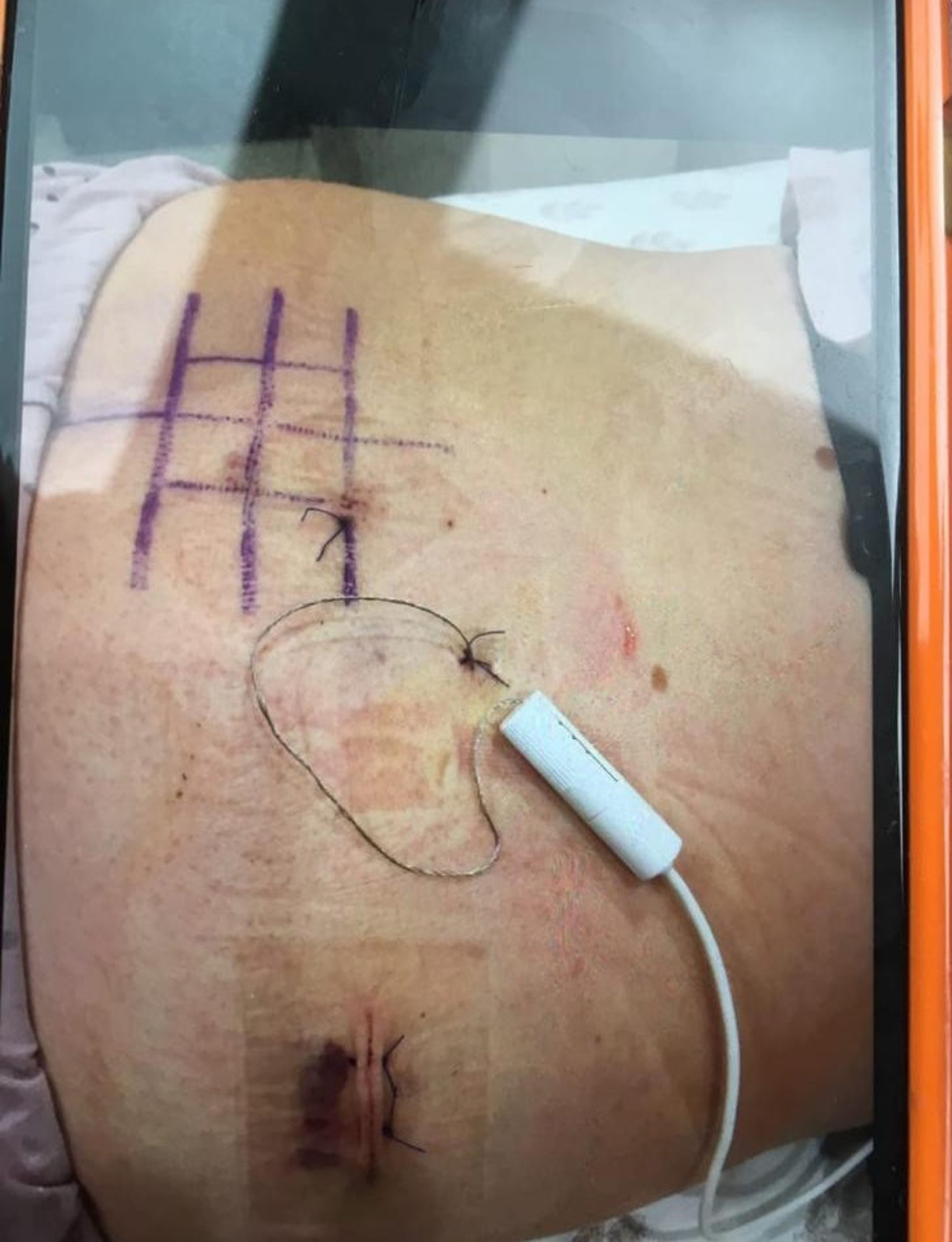 “That first full blown wee was just heaven. It felt like I had lost about two stone from my tummy."

“I was able to get my life back on track and do a bit more work. I was living most of my life pain-free and weeing three times a day."

“To have no pain was wonderful. That was the best year of my life, before it started going downhill again." 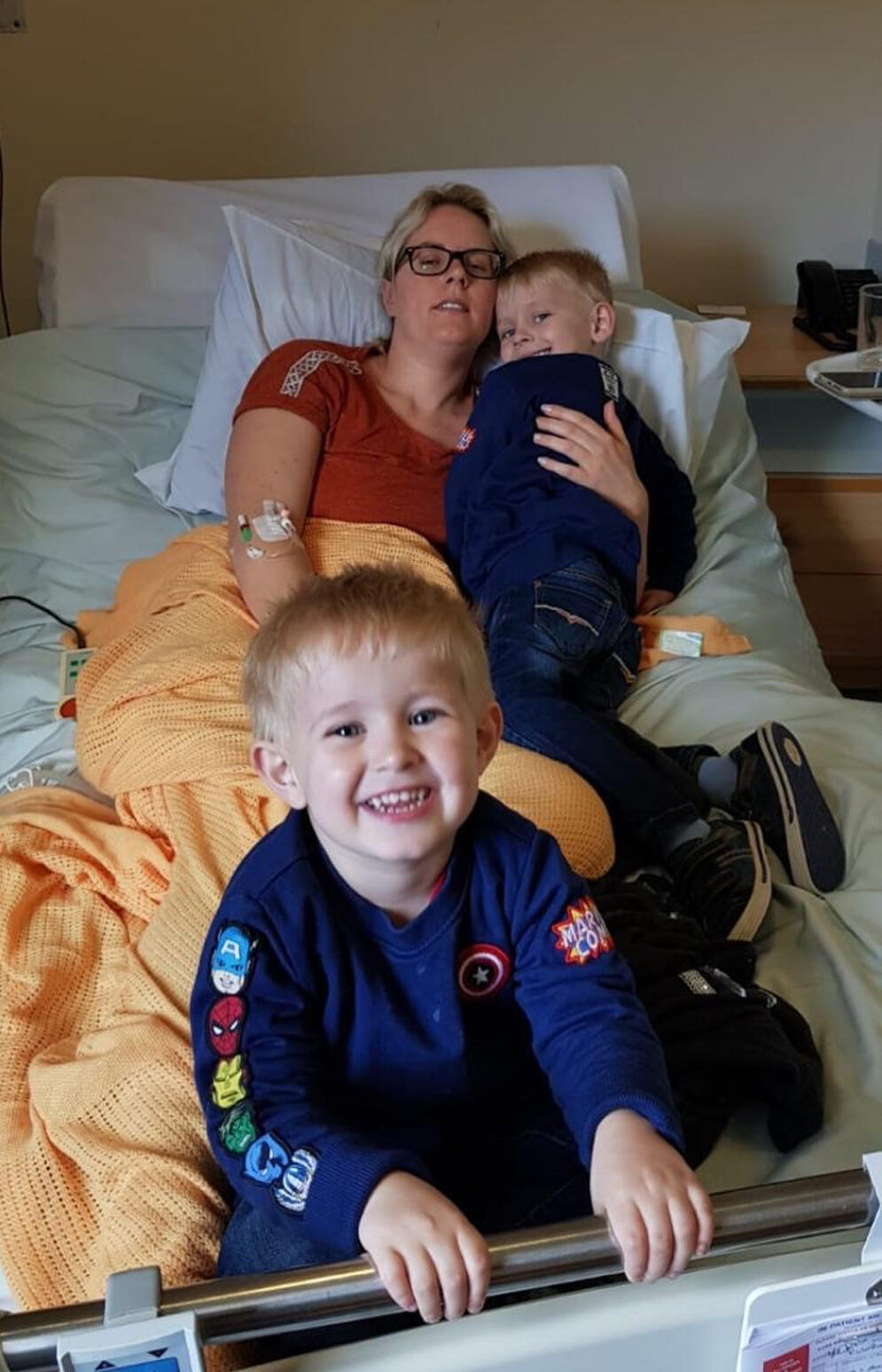 Sam in hospital with her sons, Edward and George (PA Real Life/Collect)

Sadly, a year later, the SNS stopped working properly and Sam now believes its malfunction was because of another rare medical condition, Ehlers-Danlos syndrome (EDS)—which weakens connective tissues and causes increased movement in the joints—which she was subsequently diagnosed with.

In April 2019, the SNS was deactivated and a catheter was secured to the side of her body and attached to a collection bag, strapped to her leg.

But the catheter means Sam is plagued with infections, leaving her bed-bound for four days every week and resulting in trips to hospital when she cannot fight the infections at home.

“There is an infection constantly brewing," said Sam, who takes 48 tablets daily to manage her condition.

“Every day is a battle. At any moment, the infections can turn septic. It's like a game—you have to reach the hospital before you get sepsis, which is a sometimes deadly reaction to an infection, and things can change very quickly."

“My normal life is different to everyone else's. I wake up around midday, as I only fall asleep at 3 or 4am—which doctors have advised me to keep the same, as changing my routine could make me sicker." 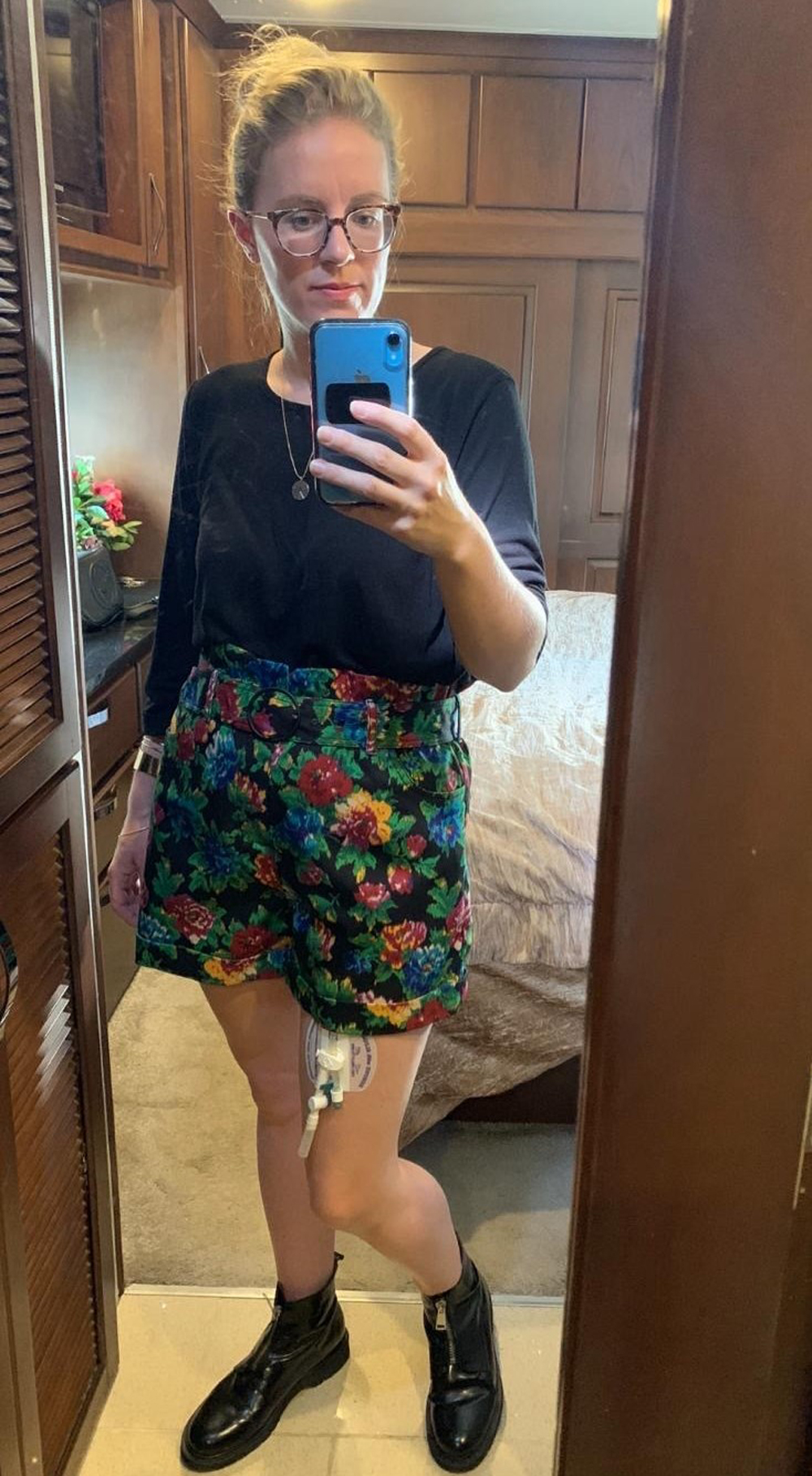 Her illness is also extremely costly, as Sam says she has spent around £20,000 ($24,375) in the last few years, looking for answers privately, and traveling to and from the National Hospital for Neurology and Neurosurgery in Holborn, central London, for her regular appointments.

And, until she gets a new SNS device fitted in April, she risks being hospitalized with a life-threatening infection if she has sex.

“Without the SNS, I have no sexual function either. I can't feel anything when we make love, so we've learned to abstain." 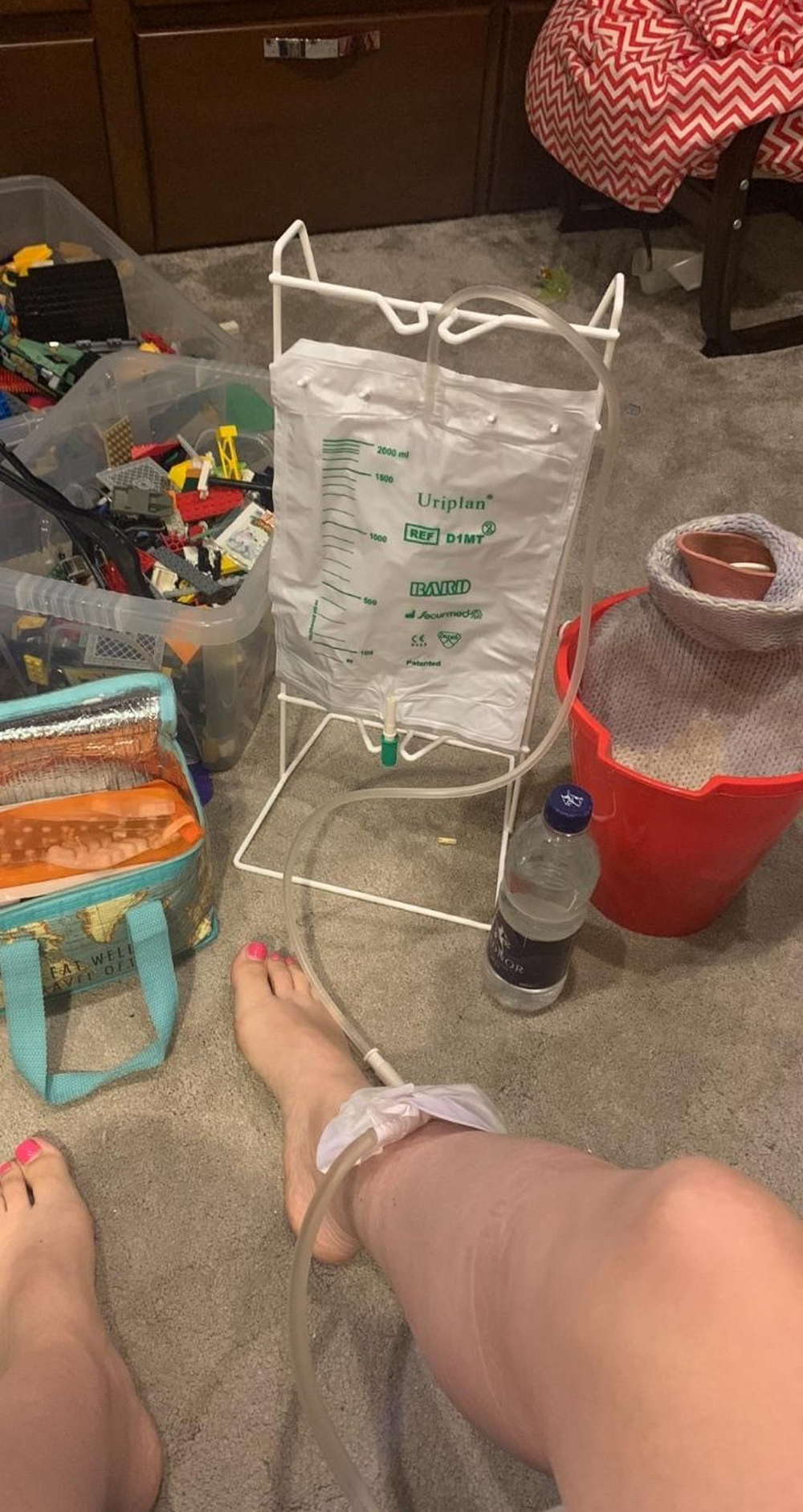 Also reliant on laxative medication to empty her bowels, in December 2019 she collapsed outside her office, as they were dangerously full.

“I went into work to check on our staff and I started to feel funny. It was about 20 minutes between me starting to feel unwell and me collapsing outside and being rushed into hospital."

“I was rushed into the resuscitation room and told that my bowels had been about to explode. They were full and I had a severe water infection. Doctors called in my family and I thought I was dying."

Thankfully, Sam survived, but says her life is littered with medical traumas, to which she sees no end.

If nothing improves, she faces having two high risk operations on her bowels and may need her colon removing completely.

Yet, despite her daily battles—which also include cyclic vomiting, where she is sick 10 times a day for six week periods—she is determined to help other with Fowler's syndrome. 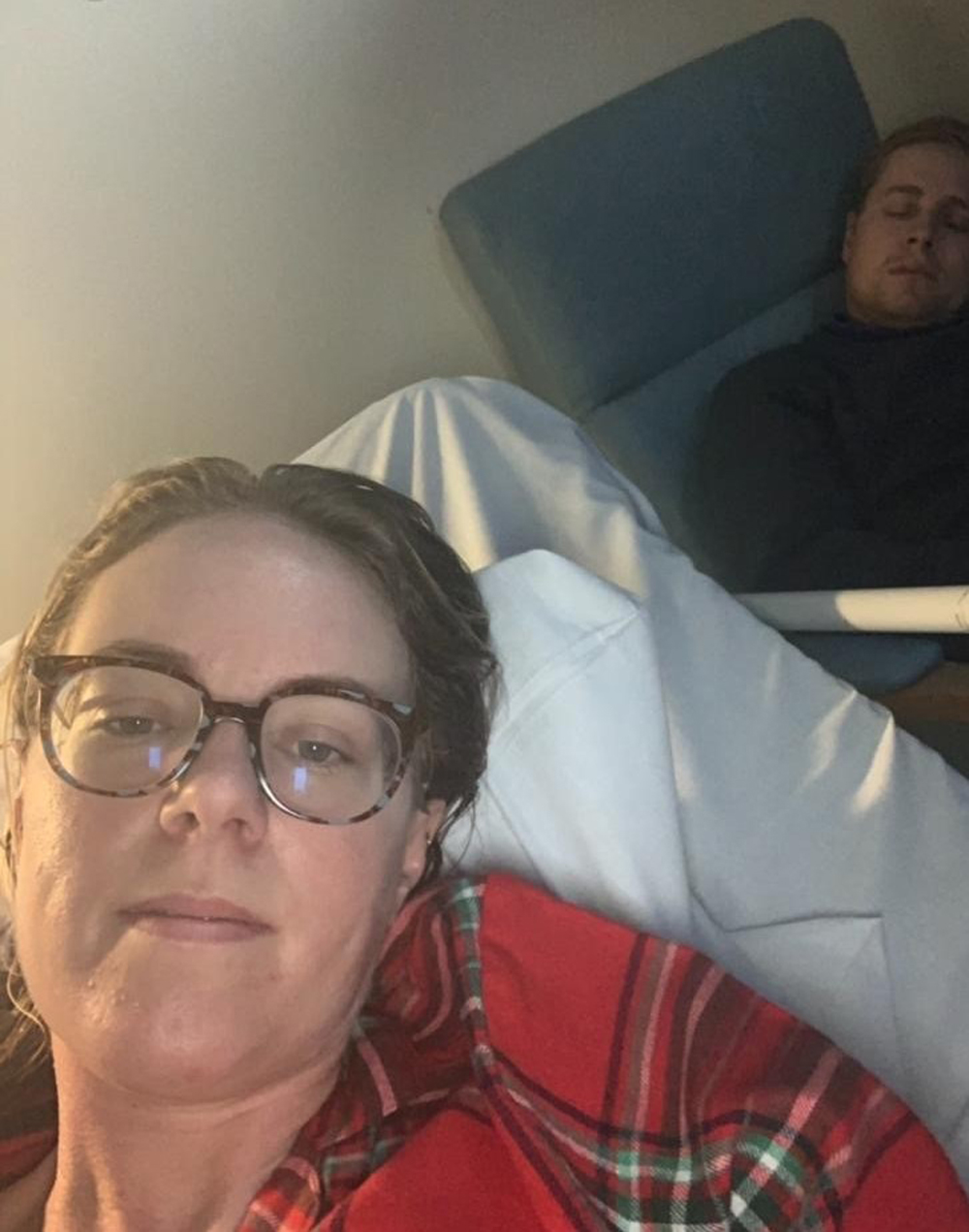 Keen to break the taboo surrounding catheters, she proudly wears shorts and skirts revealing the bag on her leg—although she wraps it in a bandage to conceal the contents—and she regularly posts in Facebook support groups for Fowler's sufferers.

“You should not be ashamed about wee or poo."

“I don't see why my bag should be hidden and a lot of people stop me and praise me for showing it. I want to raise awareness of Fowler's and for all options to be considered, including herbal remedies like D-mannose." 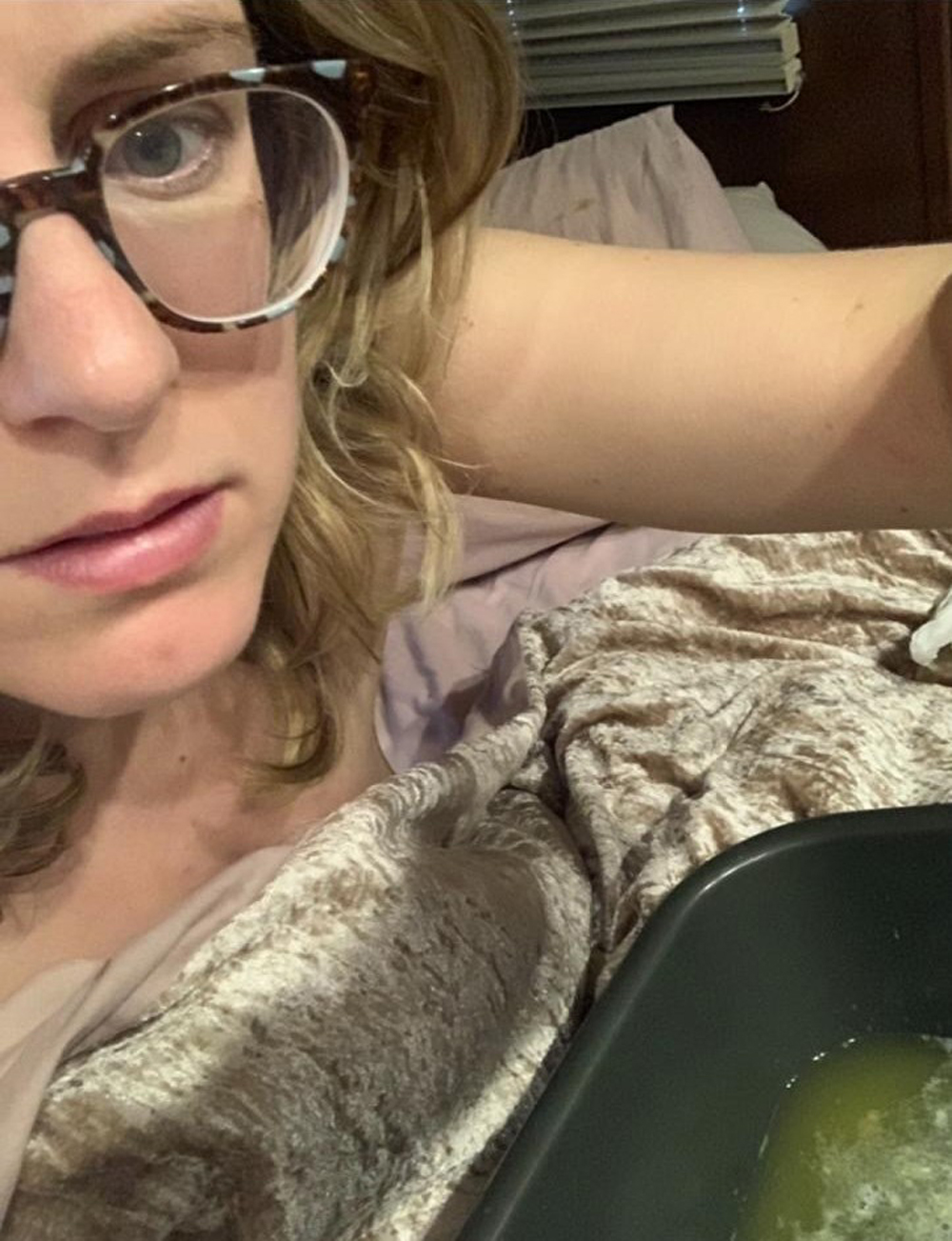 “And I want to campaign for more doctors to specialize in the condition, so it doesn't go undiagnosed."

“Sufferers are often labelled the 'forgotten group' and I am determined that this will change."