A mom-of-two who was driven to the brink of suicide by a terrifying mental breakdown has told how women’s pro-wrestling has helped restore her health and her happiness.

In 2012, despite having always struggled with see-sawing moods, Emily Read, 33, of Wymondham, Norfolk, had the world at her feet – promoting an all-female wrestling show with her husband Dann, 36.

But, as she threw her body and soul into the work, she did not realize she was suffering with undiagnosed bipolar II disorder, characterized by moods swinging between mania and depression, and suddenly hit a wall – leading to her being sectioned under the Mental Health Act and losing the business she loved.

Speaking out during Mental Health Awareness Week, she recalled: “One day in November I was doing a stock check and it all became too much. Suddenly, I just didn’t want to be here anymore.”

Unable to explain what brought on the breakdown, she remembers walking past a young family in the street and being momentarily snapped out of her psychotic state.

“A woman walked past with two kids a very similar to age in mine,” said Emily, who is mom to Freddie, 11, and Emerson, eight.

She continued: “In that moment I knew something wasn’t right and I went to the doctors, where I told the receptionist, ‘Please help me.'”

Seen by doctors, she was then sent to hospital, where she had a full mental health assessment and, eventually diagnosed with bipolar II disorder, she was sectioned for three months under the Mental Health Act and kept as an inpatient at West Suffolk Hospital in Bury St Edmunds, Suffolk.

While the ordeal was terrifying, she also believes it saved her life, adding: “Before then, I’d always been led to believe anti-depressants and other medication for your mental health were bad, because they messed with your brain chemistry.”

Emily continued: “Now I realise how stupid that sounds. When you’re in the grips of depression why wouldn’t you want to switch up your brain chemistry?”

But for Emily, who was discharged from hospital in February 2013, this was just the start of her battle.

She said: “My stint in hospital was a real eye opener, but when I was finally discharged it was just the beginning of my recovery.”

Emily and Dann with fans in Japan (PA Real Life/Collect)

“I remember my anxiety being so bad that I couldn’t even bring myself to take the laundry from the washing machine outside into the garden – I’d just leave it in there for two weeks,” she added.

In the years preceding her diagnosis, Emily had struggled with extreme mood swings, but had tried to ignore them, or looking for alternative treatments, such as kinesiology and a herbalist.

She said: “I can’t remember a time growing up that I hadn’t felt some degree of sadness or depression. It was like a cloud hanging over me and I assumed everyone else felt like that.”

When she was introduced to Dann, a wrestling promoter, in Portsmouth in 2006, while she was training to be a wrestler, they immediately hit it off and anything seemed possible.

Emily said: “I’ve been watching wrestling since I was six years old, and I can still remember my dad putting it on the TV for the first time.

“At first I was drawn to the larger than life characters, but soon it was the stories behind the wrestlers that had me hooked.”

She continued: “There’s something so simple and gripping about the underdog going against the odds and defeating the big bad monster.

“Growing up, I related to the people up on stage with their eccentric identities and extravagant mannerisms.”

Combining resources, the couple, who married in 2014, launched EVE in 2009 – an all-female, punk wrestling venture.

Hiring a space in Sudbury, Suffolk, they started small – hosting two 10 match shows a year – with Emily and Dann also running their own health food store.

She continued: “I wanted to create an environment where women wrestlers could be the stars of the show without being objectified or looked down upon.

“In the early days we had about 80 people attending the shows. It was a small turnout but there was a real buzz in the air and we knew we’d tapped into something unique.”

Pitching the shows as family events, with adults paying £10 and children admitted for free, the couple were delighted to see a growing number of young moms coming.

But, as the pressures of running her own business grew, Emily’s mental health started to deteriorate.

She said: “Everything that happened at that time is a bit of a haze, but I’d neglected my mental health for so long, putting all my energy into launching EVE and opening a new health shop that it finally caught up with me.”

She added: “I couldn’t clean or wash, I couldn’t keep hold of the threads of my life. Even having to think hurt.”

Sadly, after Emily’s breakdown, with Dann left to run everything, it was not possible to keep the business going.

Reluctantly, in December 2012 they were forced to close, and Dann had to give up work to look after his wife and children full-time.

But the couple still had each other and were determined not to abandon their dream forever.

After a slow recovery, in late 2015 they began to rebuild their business from the ground up.

“Getting all these strong and powerful women into one venue was something that had never been seen before in London’s wrestling scene,” said Emily.

“This time around we used the Eventbrite, an online platform that puts all the tools for hosting massive events in one place.

“We built up an army of followers online and across social media – and it didn’t stop at wrestling fans either – everyone wanted to get involved.” 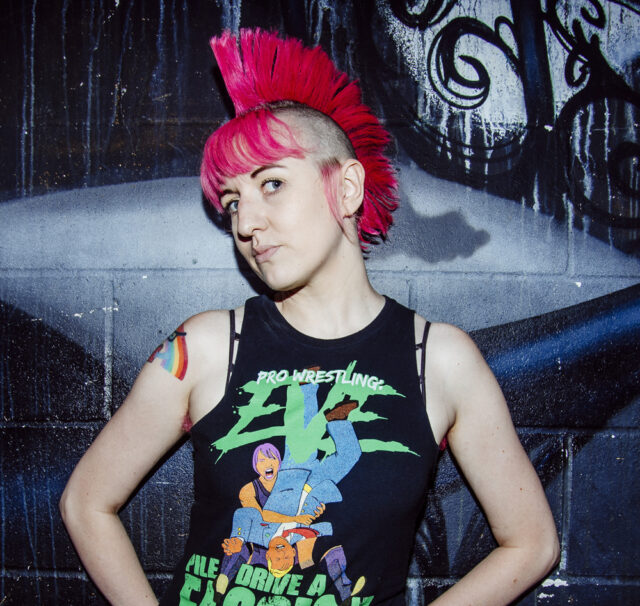 She continued: “The buzz in the air that night was electric and when I got up on stage, I just knew I had to be honest about my journey up until that point.”

She bravely talked about her mental health battle with countless strangers and, in the weeks that followed, she realized that sharing her story with the audience encouraged people to speak out about their own experiences.

She said: “My inbox is constantly full of messages from women who are saying they’ve experienced the same problems as me and want to change.”

Now one of the largest female wrestling ventures in Europe , as well as staging two sell-out shows a month, EVE also has an academy, offering weekly pro wrestling training classes for anyone who is a “self-identifying woman, non-binary, femme presenting and comfortable in a woman-focused environment.”

Emily said: “Women’s wrestling has always been incredibly close to my heart. Seeing strong, powerful, women up on stage expressing themselves is hugely important and it has helped to remind me of my own inner strength.

“I’ve tried every alternative medicine under the sun, and nothing has complemented my mental health treatment more than women’s pro-wrestling.”

She added: “The collapse of EVE coincided directly with my breakdown, but I knew I had to give it another shot.

“But one thing that always frustrated me is how there was never a platform for women to showcase their wrestling skills, instead they were simply being lauded on stage for the satisfaction of men, as a mere support act.

“That’s why I wanted to create a platform for where women could fulfil their dreams of becoming wrestlers themselves.” 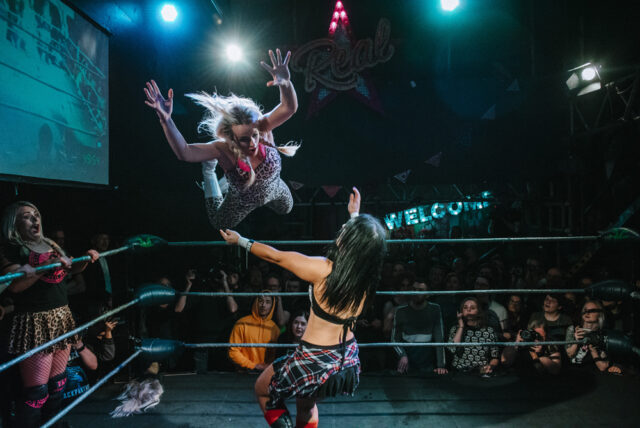 And, with success beyond her wildest dreams, Emily and her husband are now launching Europe’s biggest ever all-female pro-wrestling event, Wrestle Queendom II, at York Court, Bethnal Green, East London, June 30, where they will be showcasing nearly 30 wrestlers from around the globe to a 1,200 strong audience.

Emily said: “We’re here to stay and we want to be as loud and proud as we possibly can.

“Women’s wrestling is getting bigger and better and we’re determined to use it as a platform to break social stigmas and taboos for as long as we can.

For more information on how to turn your passion into your profession visit www.eventbrite.co.uk/howitworks