Dog Owner Responds After Being Criticized For Dyeing Her Pups' Fur

A dog owner has barked back at critics who have accused her of treating her pet pooches like toys – by dyeing the furry fashionistas all the colors of the rainbow.

When dog groomer Haley Bennett, 21, steps out with her poodle, Opal, her chiweenie, Lilah and chihuahua, Stella, she certainly causes a stir – because two of the dinky dogs sport psychedelic coats.

Not only are they multi-colored, but like any self-respecting style icon, their looks are seasonal.

Naturally white-furred Opal, chosen because her coloring would display dye more vibrantly, has Christmas and Easter looks, while Stella rocks a rainbow tail.

But, as little Lilah suffers with pattern baldness, Haley, who lives near Cincinnati, Ohio prefers not to dye her and leaves her fur natural.

Explaining how she creates the head-turning looks herself, she said:

“Lots of people frown on this sort of thing. I once had a lady say to me, 'If you want to dress something up, just get a doll,' which really took me aback." 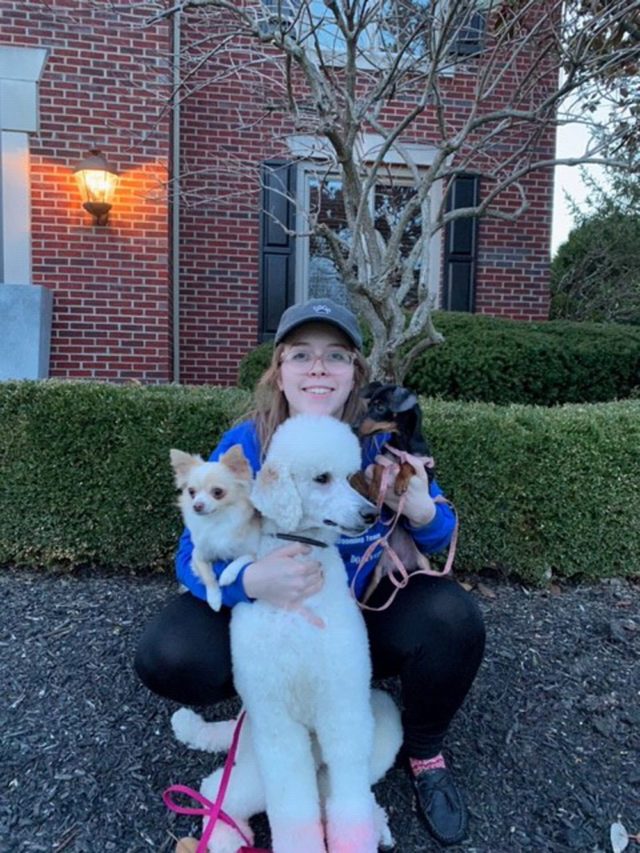 “I would never force my dogs to do something they don't want to do."

“They love the one on one interaction of having their fur dyed, and lap up the attention when they're all colorful."

“I think they know they look cute. Plus the dyes I use are non-toxic and safe for pets." 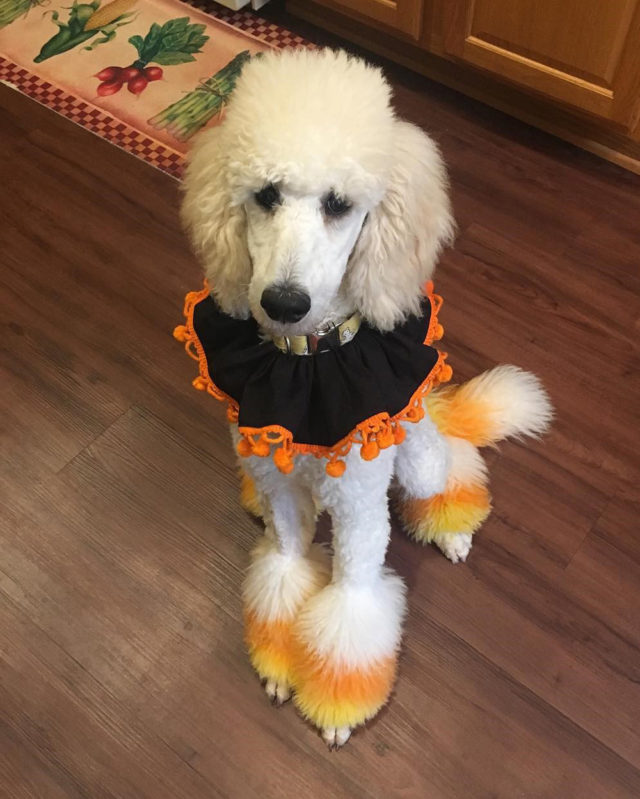 Haley first came across doggy dyes when she was at a pet shop one day with Stella, now four, and keen to do something creative with the pup's bushy tail, leapt at the chance of buying some paint pens, specially designed to be used on fur.

“I had a little experiment and dyed Stella's tail rainbow colors," she said.

“She was my trial subject, and where it all started."

Soon after that, during her training to be a bather and dog groomer, which started in 2015, she learnt how to color fur using proper dye. 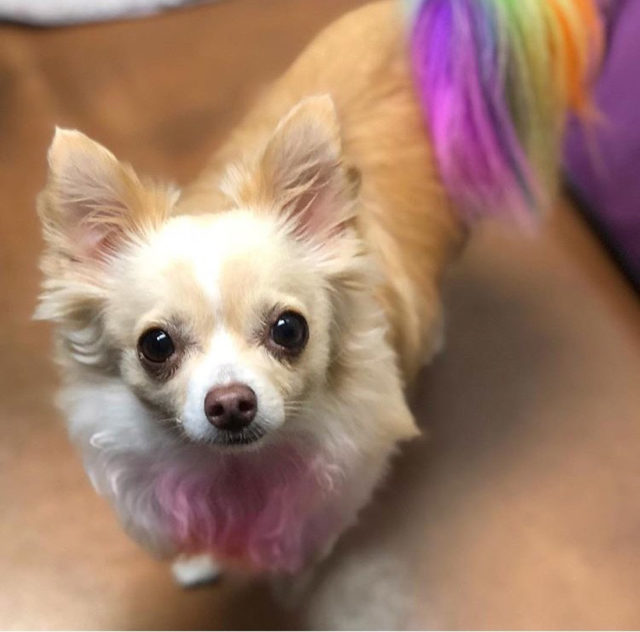 “I love dogs, and getting to be around them, getting them all clean and happy as a job is so rewarding."

“After learning about the dye during training, I went online and found all these groups of people who love experimenting with dyes too. Their pets all looked so pretty."

In December 2017, Haley added Lilah to her barking brood – although, as she has bald patches which make her skin sensitive, the cause of which is unknown, she has not been exposed to dye. 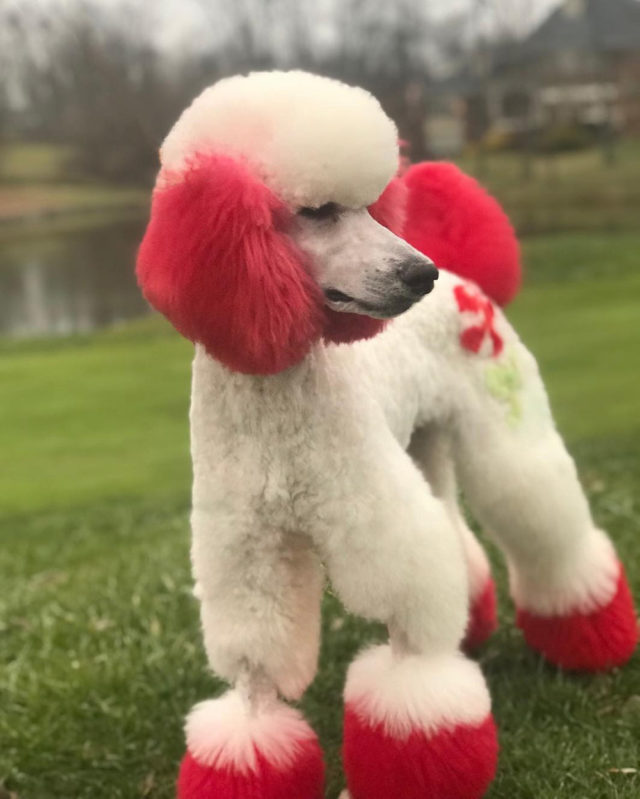 But when Opal joined the family in early 2018, her white fur was perfect for dye.

“I wanted a dog with white fur, so the color would be bright and stand out."

Initially, because she was so tiny, Haley used the pens she had first used on Stella to color her coat.

Then, at around six months old, she was dyed for the first time in an orange and yellow candy corn-style look.

Since then, she's proudly shown off 4 July, Christmas and Easter designs. 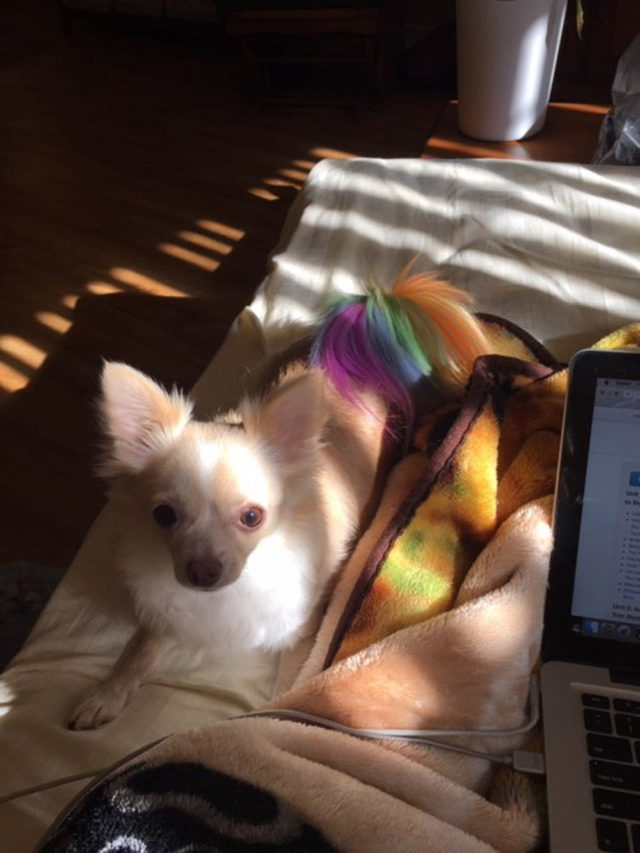 “The dye itself only needs to sit for around 15 minutes, but the design and getting it all in the right place takes longer, so it can be an hour to an hour-and-a-half long process."

“It can be hard to get the dogs to sit still for that amount of time, but the tables in the grooming parlor where I do the dyeing help."

“I would never put them through anything they aren't comfortable with, and have never sensed any anxiety or discomfort from them." 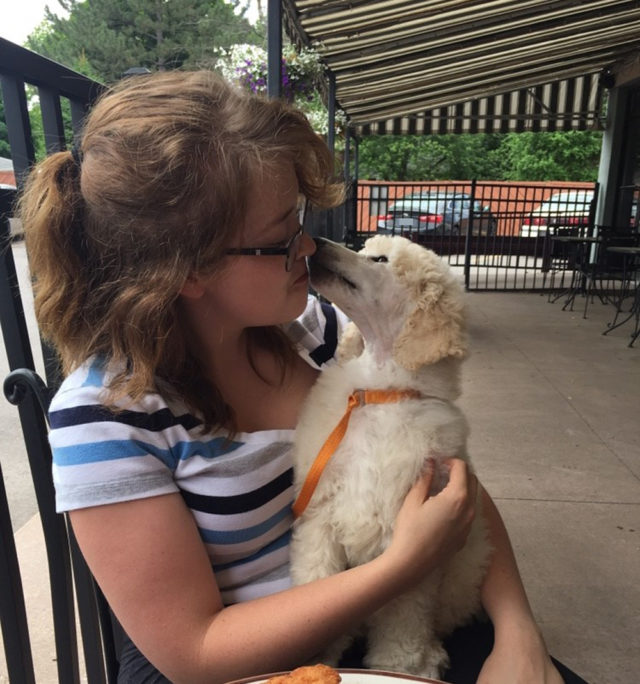 “When we're done, they run around in circles all excited. They know they look amazing as they get so much fuss."

How long the dye lasts depends on the vibrancy of the color used, and Haley lets Opal's grow out naturally, joking that she gets roots, just like humans.

And, when she is out and about with the colorful canines, strangers constantly stop her to ask about their funky fur. 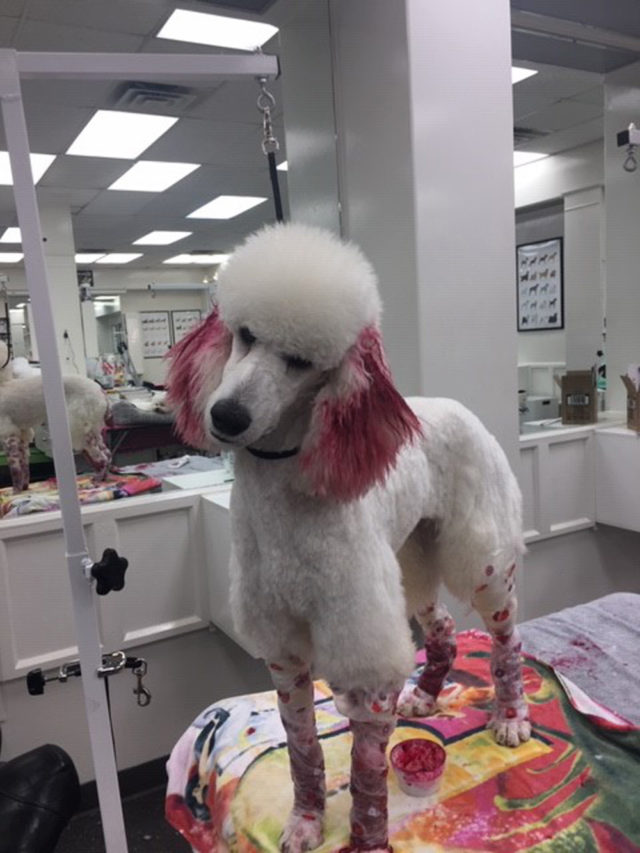 “People literally stop while they're driving to tell me how great Opal and Stella look. I'm always asked lots of practical questions too, like how long it takes, how long it lasts and whether it's safe – which it is, and non-toxic," she said.

“I do get some negativity, and people see what I do as dressing up my dogs, but I don't. It's a way of expressing creativity."

“They're both such bubbly, goofy dogs – especially Opal. Her personality suits being bright and pretty."

“People literally dress their dogs up in outfits and nobody bats an eyelid, so I don't see how this is any different."