A mom-of-three opened up about the hardships her family has experienced after her husband suffered a life-threatening stroke and had the left side of his skull removed to relieve deadly pressure on his brain.

Jo Smith woke up one Thursday concerned that she could not her her three dogs running. Usually, her husband, Geoff Smith, takes them outside around 6:30 AM. To her horror, she found Geoff sitting in his boxer shorts with a gash on his head, eyes rolling backwards and the right side of his face collapsed.

"I would normally hear the dogs’ feet on the hallway at that time, so I went downstairs and saw Geoff’s legs lying halfway through the doorway to the lounge," Jo said. “He was sat up on the floor wearing his boxer shorts, but his eyes were rolling and he wasn’t breathing well. The right side of Geoff’s face had collapsed and he had a long deep gash to the side of his head, which was bleeding so I screamed for my daughter Paige to call an ambulance while I sat with him. He struggled to talk and, as we waited for the ambulance, we were told to lie him down on the floor and tell the operator ‘yes’ every time he breathed.”

When the paramedics arrived, Jo spotted his slippers in the garden next to a dog scoop bag and tried to piece together what had happened. She then checked his Fitbit watch, which showed her husband had been up for a whole hour before she found him.

Adding that doctors are still trying to determine the cause of the stroke.

“I think Geoff woke up feeling unwell, but still took the dogs outside where he fell – due to the stroke – and cut his head on a gravel border in the garden,” Jo said. 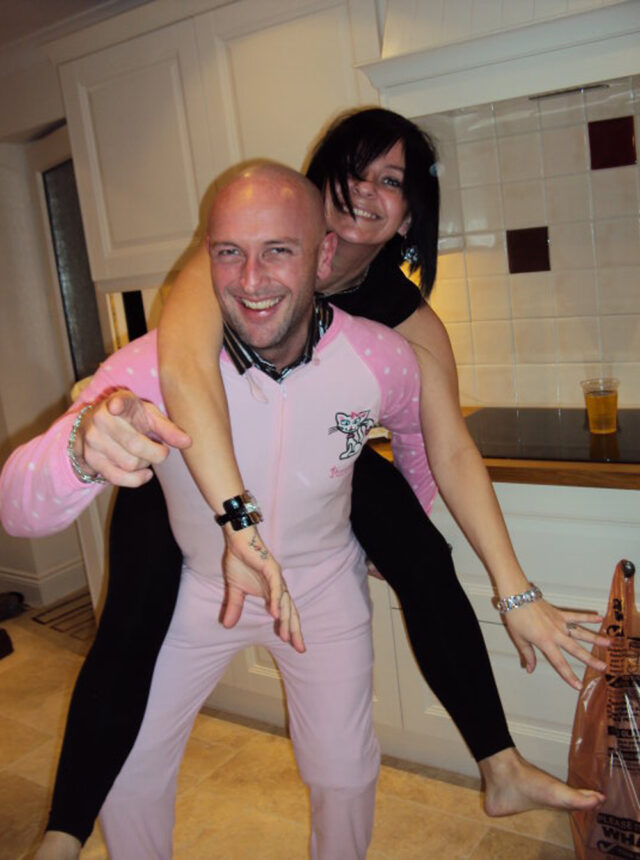 “Every dog had blood on it, so they had clearly licked his wound," she added. "He must have struggled back in where he undressed before he collapsed on the floor, where I found him.”

Rushed to the emergency room at Broomfield Hospital with Jo by his side, doctors confirmed that Geoff had suffered a a devastating hemorrhagic stroke – where a blood vessel within the skull bursts and bleeds into and around the brain, normally caused by high blood pressure.

Jo was told by doctors that they would be monitoring the brain swelling before transferring Geoff to Queen’s Hospital in Romford, Essex, which has a specialist neurology unit. “The doctor told me, ‘he’s young and fit and stands a good chance,’ but I couldn’t believe what was happening,” said Jo. "I kept thinking, ‘this must be a nightmare and I am going to wake up.’ I kept asking, ‘why me? Why Geoff? Why this beautiful person who is my soulmate?’” 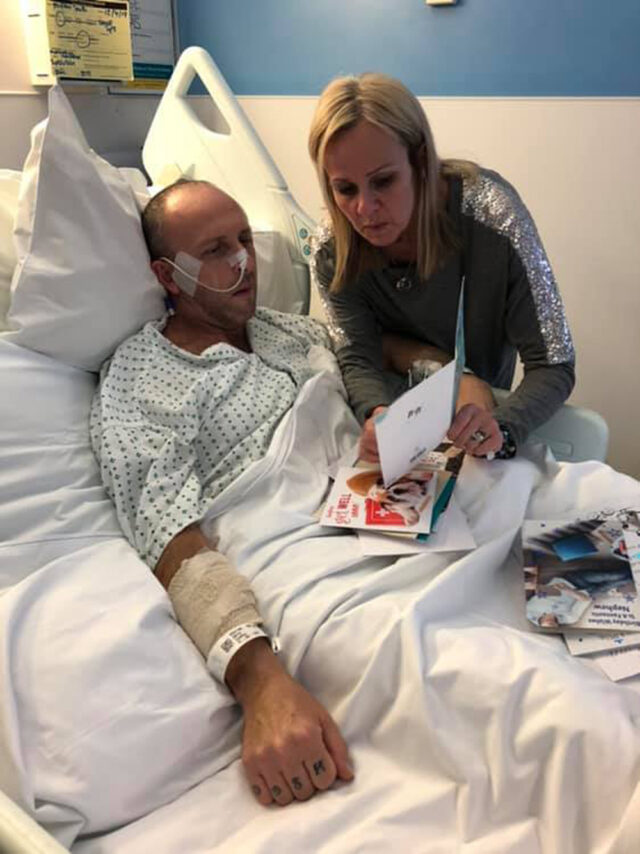 According to Jo, Geoff went to the gym three times a week, never smoked, had healthy blood pressure and no raised cholesterol levels.

He and Jo lived a normal family life, although Geoff had been doing a lot of overtime and she admitted they worked very hard.

“We had no indication anything was wrong, nothing at all,” said Jo.“But when I saw him lying there, I knew what it was. We’ve all seen the adverts, we all know the signs of a stroke.” 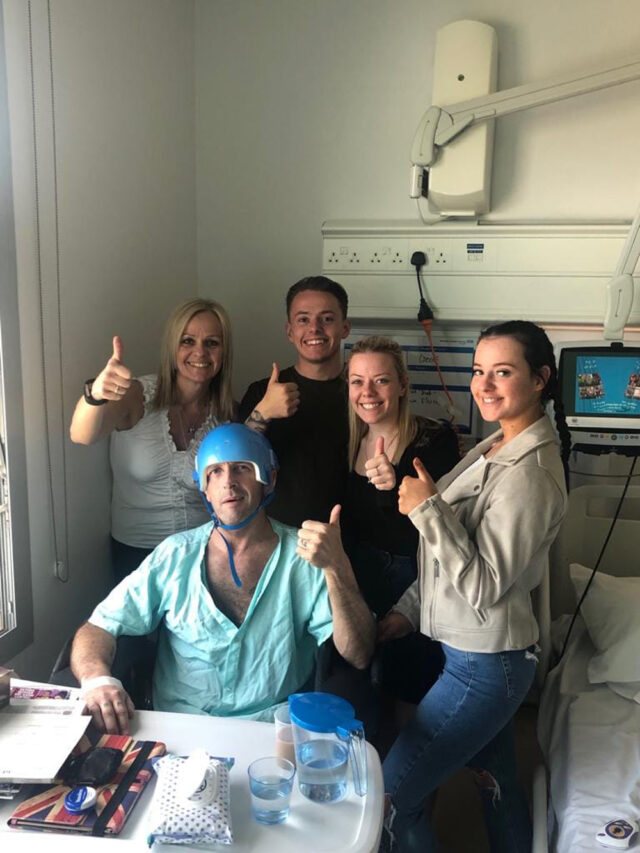 Jo, Paige, Josh and Georgie and Geoff the day he was transferred back to Broomfield (PA Real Life/Collect)

Told by medics that the first 72 hours following a stroke were critical, Jo realized there was a real risk that Geoff might die.

“It’s so upsetting seeing someone you love lying there like that,” she added. “You don’t know whether they can see you, hear you, or understand you. You just have no idea.”

Jo learned afterwards that Geoff had been given emergency resuscitation treatment and nearly did not make it. 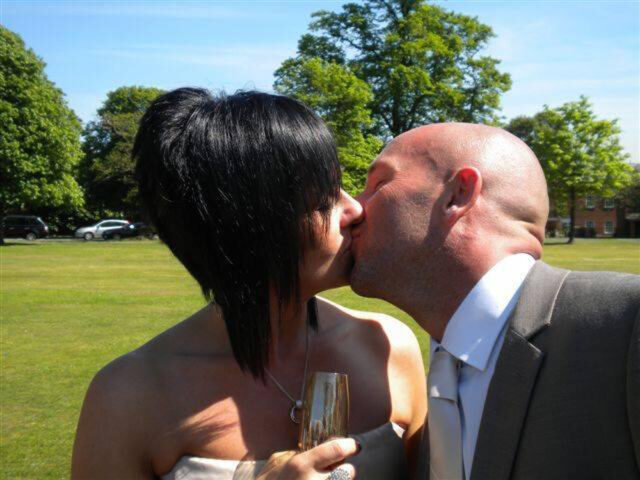 “I didn’t go to Queen’s in the ambulance, but followed in the car with my mom, dad and Paige,” she recalled. “I just kept saying to everyone, ‘Please promise me he’ll make it.’”

Geoff was rushed straight into surgery on arrival, so that doctors could remove the left side of his skull – a procedure known as a craniotomy - which would then reduce the brain swelling.

“The surgeon told me Geoff could suffer severe speech and language difficulties, as well as physical difficulties, but I said, ‘I don’t care, just save him,’” said Jo. 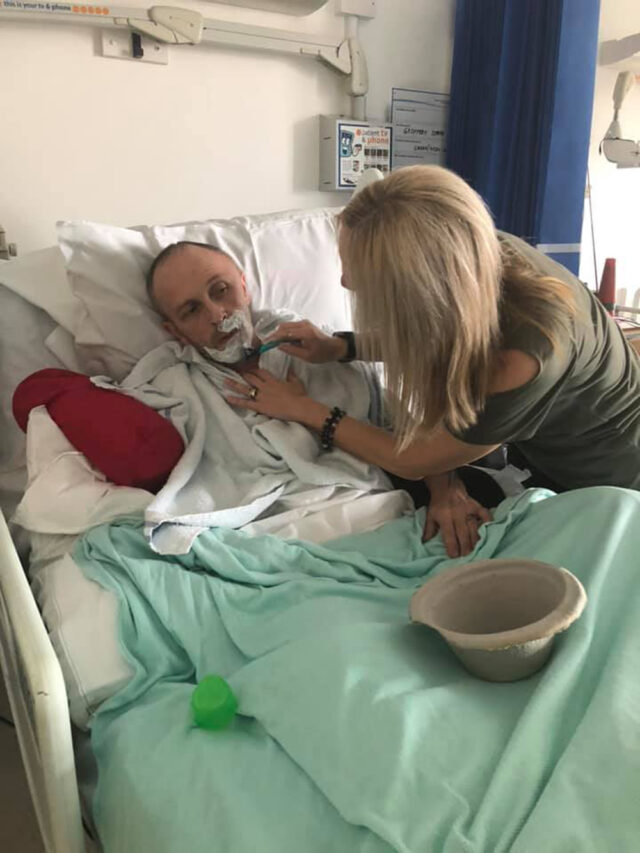 The 12 days following his surgery were a rollercoaster for the whole family, with Geoff recovering on the critical care ward, where he was put back on a ventilator three times to aid his breathing.

In time though, he began to improve and they started to communicate by blinking and squeezing hands, as he was still on oxygen and could not speak.

Later on, he was well enough to remove his oxygen mask and said his first words to Jo, which were: “I love you.”

Jo with her parents, children and Geoff at Christmas (PA Real Life/Collect)

“That was the most incredible feeling, hearing those three words which we all throw around the place," she recalled. “I never thought he would survive. He’s the optimist in the relationship – and here he was telling me he recognized me and he loved me.”

On Jo's birthday, Geoff was finally moved from the hospital’s critical unit to the acute ward, where he spent the next six days slowly recovering from his stroke and being switched from tube feeding to soft foods. 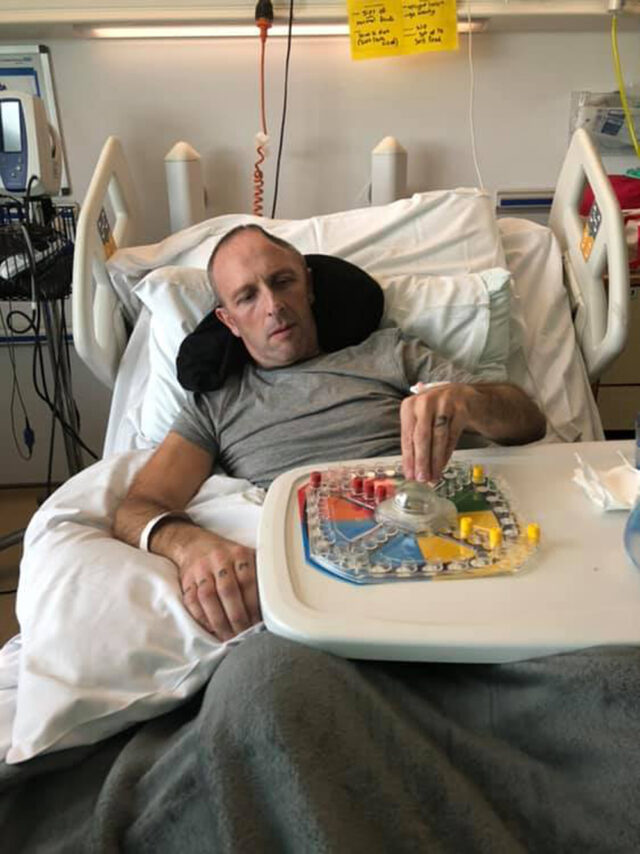 “He was quite weak still, but he could speak and even sing and it was such a relief he was off the critical ward,” said Jo.

Huge fans of Ant Middleton, the chief instructor on the TV show SAS: Who Dares Wins, they had been due to see him at a local event on 9 April, but Geoff’s stroke meant they had to sell their tickets.

Someone told Ant what had happened and, to Geoff’s delight, the star sent him a video message, encouraging him to “keep on fighting.” 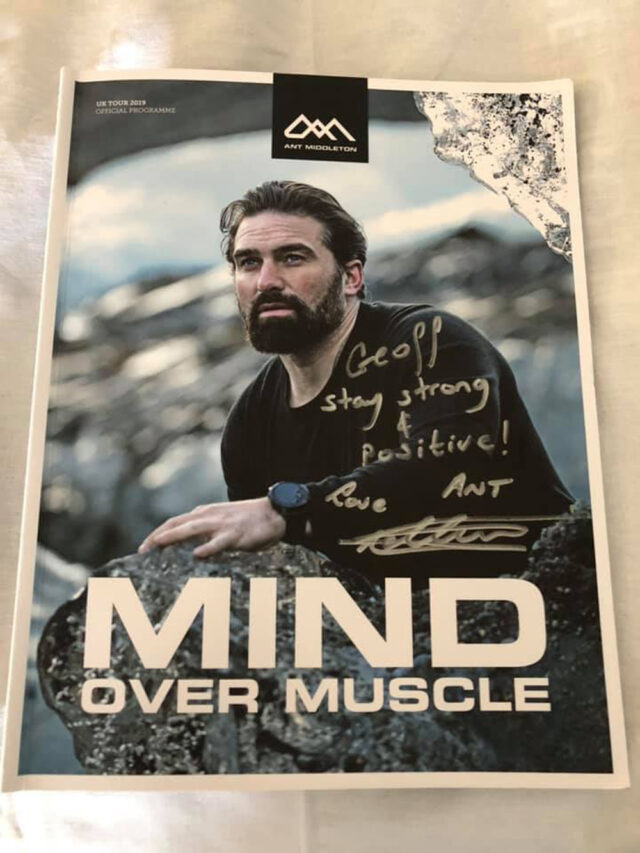 A message of support from Ant Middleton (PA Real Life/Collect)

“It was one of the highlights of his recovery,” said Jo.

Now back at his local hospital, Geoff is improving every day and is due to be assessed at east London’s Homerton University Hospital in Hackney, which specializes in neurological rehabilitation.

“Getting a bed there is like winning a golden ticket, so I’m praying Geoff can start his rehabilitation soon,” said Jo. “It’s what he needs. He’s bored and fed up and as soon as he is medically stable, we’re hoping rehabilitation can start, even if it’s at another local hospital.” In the meantime, Jo has launched a GoFundMe page to raise money to help finance both Geoff’s rehabilitation, post hospital, and to help keep the family afloat financially.

“I’m going to effectively be a single parent for the foreseeable future,” she said. “We’ve never lived beyond our means, but we have a mortgage to pay and if I want the best treatment for Geoff, including alternative and other specialist therapies, I am going to have to find the money for that. I did feel a bit like begging at first and I almost wanted not to push the button to go live with my GoFundMe page, but I am like a dog with a bone, trying to get him well. When you love someone this much, you fight their corner. Geoff will be Geoff again and he will walk through that door, come hell or high water.” 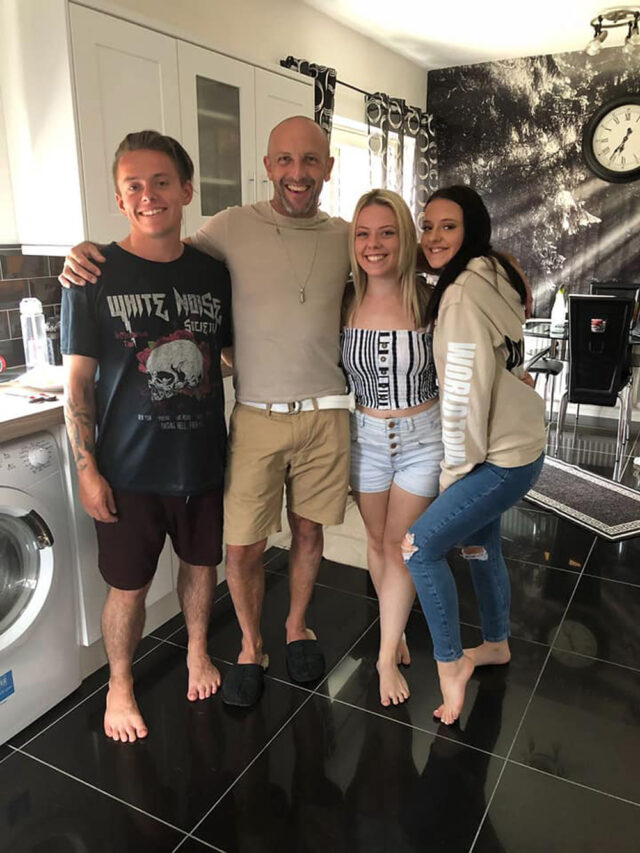 Also, while Jo accepts that Geoff may not be able to go back to his old job, she is determined that he will be well enough one day for them to fulfill another dream.

“We’ve always talked about running a kennels or a cattery together and got quite close to doing that a while ago, but we couldn’t make the money work and decided it wasn’t the right time, so we put it on hold," Jo said. “There’s a cattery in Lincolnshire in the countryside that I’ve seen that I know would be perfect for us.” 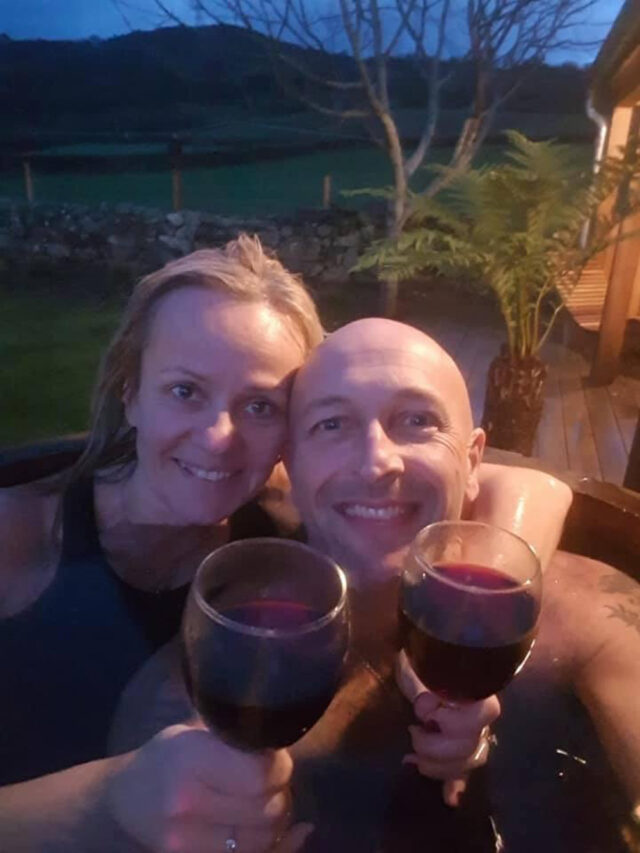 Jo and Geoff got married nine years ago, after they met on Facebook and lives with him and her three children from her first marriage, Paige, 23, Josh, 20 and Georgie, 17, and their dogs, Benson, Reggie, and Dudley.

“And I don’t believe what the doctors say, that stroke patients reach their maximum recovery in two years, because other people who have had a stroke, and their families, say differently." Jo said. “Now all I want is for Geoff is to have the chance of the best recovery possible and I am not giving up on that, or on us making our dreams come true.”