Two blind veterans have found love again in their 90s and celebrated with a blessing where they vowed to live out their days together.

Peter Van Zeller and Nancy Bowstead, both 97, celebrated their new-found romance with a ceremony at the Blind Veterans UK’s chapel in Ovingdean, near Brighton, on Wednesday.

The pair, who both served in the Second World War, met in May last year at the sight loss charity’s training and rehabilitation centre where they both now live.

Mr Van Zeller proposed just over six months later in November and the pair decided to make a formal commitment to each other surrounded by family and friends. 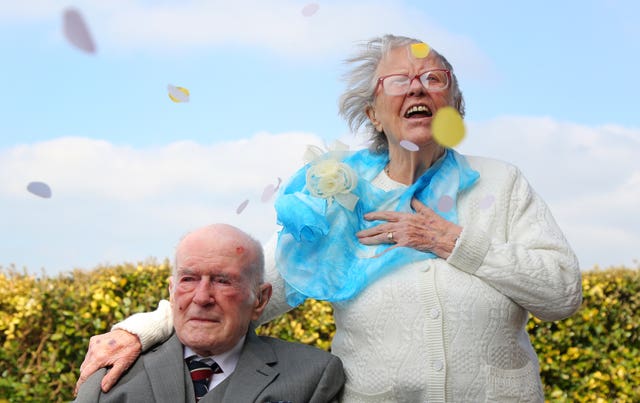 They held hands throughout the service, which had all the hallmarks of a wedding without the legal formality of a marriage, in a chapel decorated with flowers and hearts.

Mr Van Zeller said he fell in love as soon as he met Mrs Bowstead, adding:

“This lady came and sat next to me in the lounge after dinner."

“She definitely had a spark about her and we hit it off immediately."

“Until I met Nancy, I hadn’t realized how lonely I’d really been since my wife died. We just want to live and be happy together for a very long time.”

But Mrs Bowstead jokes Mr Van Zeller was “a little grumpy at first” before they got chatting, adding:

“We now live just four doors down from each other so I can go and visit him whenever I wish."

“He proposed because he wanted to make sure I didn’t go off with another man. There are a lot more men than women here." 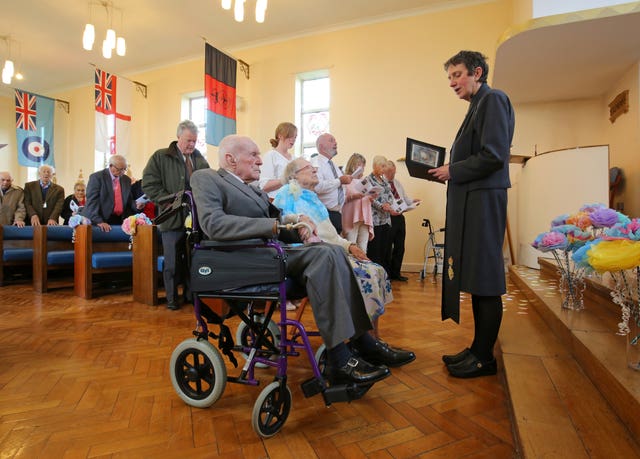 “It is a dream come true to know that I could be treasured and feel loved by someone as wonderful as Peter after many years alone. It really has been a miracle and we love each other to bits.”

Born in London and growing up in Inverness, Mr Van Zeller joined the Royal Air Force aged 18, training as a pilot and flying the Westland Whirlwind fighter jet in the 263 squadron protecting convoys of cargo vessels at sea.

But he left after two years when a friend piloted his plane while he was on leave, crashed and died.

He joined the Army in December 1943, being sent to Sword Beach in Normandy in June 1944 about a week after the D-Day landings serving in the Somerset Light Infantry.

Aged 23, he was shot in the right arm by a sniper during an assault on the town of Villers-Bocage.

Born in Widnes, Cheshire, Mrs Bowstead told her family aged 17 she must leave her home to serve her country, joining the Auxiliary Territorial Service (ATS) in 1941, training at Lancaster and Oswestry.

She was also taught at Harrogate and Edinburgh and was commissioned as an officer in 1943. She then served on a gun site in Swansea for the remainder of the war and was discharged as a subaltern in 1948.

She has two children and her husband Derek died in 2013 aged 89. 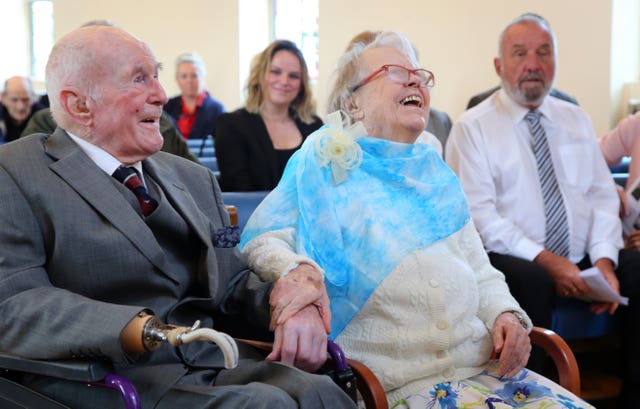 The new couple both lost their sight much later in life – both due to glaucoma and after Mrs Bowstead had two strokes while Mr Van Zeller also had macular degeneration.

Mrs Bowstead started receiving support from Blind Veterans UK in 2011 and Mr Zeller in 2016, and they take part in arts and crafts courses at the Brighton centre.

The charity’s chaplain, Clare Callanan, officiated at the service which included prayers, readings, favorite hymns picked by the couple and a declaration of their love where they made promises to honor each other.

They marked their love and friendship by exchanging rings. Describing them as a “beautiful” couple, she said:

“Peter and Nancy have found a mutual love, respect and understanding with each other and that is something that should be celebrated."

“This example of commitment is a blessing to all of us as part of the Blind Veterans UK family.”

After the service the pair laughed and joked together as they gathered outside for photographs while they were showered with confetti.

“We want to live forever and enjoy our time together. We’ve had a lot to face in our lives and we just want to enjoy each other’s company."

“We are looking forward to doing all sorts of things together."

“We are so happy. This is home, Ovingdean is home.”

“We are just delighted for them, that in the autumn of their lives they have found each other.”

The pair marked the occasion with a reception with loved ones, enjoying a buffet and cake while raising a toast.