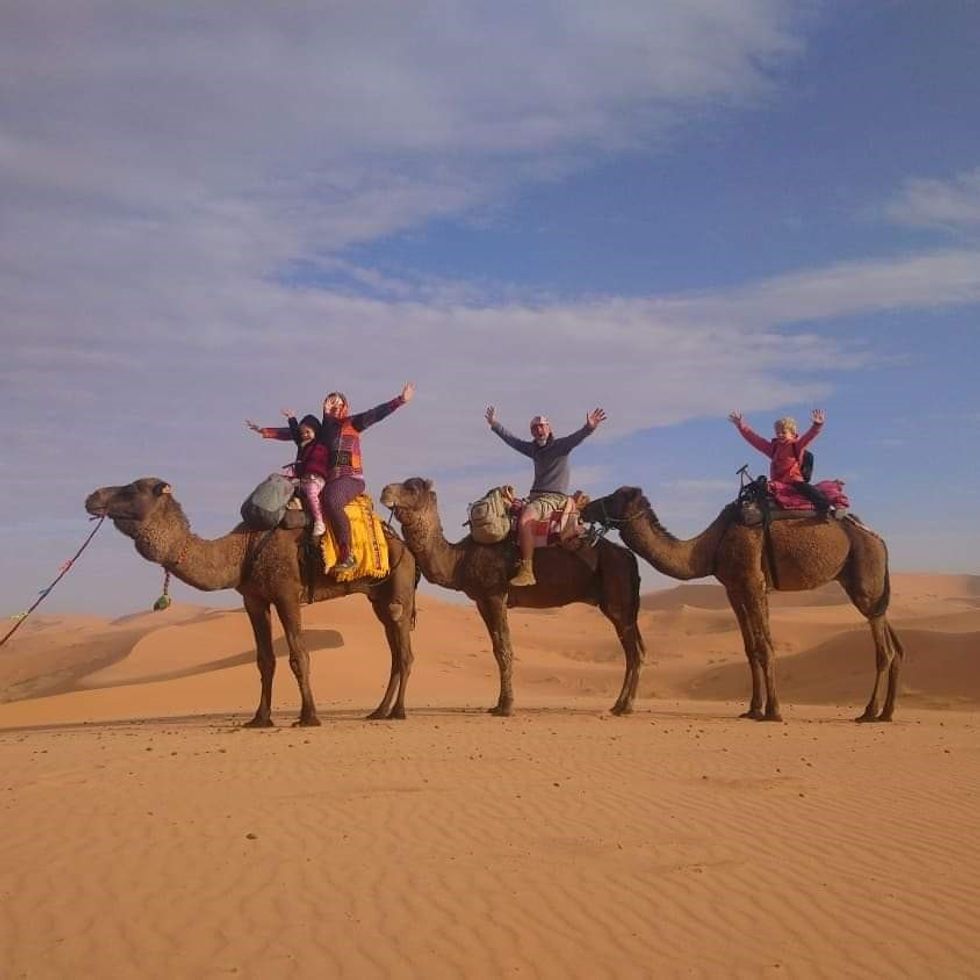 A mum-of-two has sold her £90,000 ($117,000) house and all her possessions, ditching the 9 to 5 to travel the world in a motorhome with her husband and young children after being rocked by a series of bereavements.

When Rosie Beeson, 27, held a demanding role as an HR specialist for the British Army and her husband Dan, 48, worked long hours as a production manager, life for them and their children, Monty, eight, and Winter, five, was hectic.

Their “wake up call" came after losing several beloved family members – including Dan's mum Lulu, 76, in July 2015, his dad Roger, 75, in July 2016, and Rosie's father Paul Hodgson, 65, who died after a seven month battle with liver cancer in December 2016 – prompting them to rethink their lives.

Rosie, of Ilkeston, Derbyshire, said: “We lost so many relatives, it felt like every few months there was another funeral to plan.

“Dan's mum left him some inheritance, so we bought our house – a three-bedroom terraced home – outright. We thought the kids would have that as savings one day when we were no longer around.

“I didn't inherit anything when my dad died and Dan and I realised it wouldn't have made the grief any easier. When you lose a parent, money isn't a comfort. It's the happy memories that get you through."

By then, Rosie had left her job to educate her children at home after Monty was diagnosed with autism, and she started wondering how she could swap conventional family life for a less regimented existence.

And in late 2017, spotting a Facebook page about parents who were home schooling their children while travelling the world in motorhomes, she began working on plans to join them.

Broaching the idea with Dan in April 2018, he was all for it, so they sold their house in February 2019, buying a £21,000 motorhome the next day and hit the road, travelling through France, Spain, Portugal and Morocco, where they are today.

Rosie said: “We realised we didn't want that 9 to 5 life, where we were all knackered with no energy for family time and no money for holidays.

“Our losses made us both realise that life is short and anything can happen in an instant.

“When we die money and material possessions won't make our children's grief go away. We'd far rather they were able to look back on their crazy childhood memories of travelling the world in a motorhome."

Living on the open road could not be more different to the rat race they were once part of.

Swapping the Army for more casual bar work about a year after having Monty to spend more time with him, life changed dramatically as he approached school age when he was diagnosed with autism – prompting the couple's decision to home educate him.

Rosie said: “We had tried to send him to nursery, but it just wasn't working. We then found an independent school where he did reception and year one class, but they believed he needed one to one care, which they didn't have the funding for."

She continued: “We thought that starting year two at a mainstream school would be detrimental to him, so we were thrown in at the deep end of home-educating.

“I never knew the community existed until I joined it, but everyone is so supportive and we decided to take the home education path with Winter too."

From then until 2018, Rosie taught the children in the day, while Dan went to work, often coming home exhausted after a long shift.

In April that year, she presented her husband with a radical plan, saying: “We sat down together one evening and I said, 'What do you think about selling everything to travel the world?'

“His eyes widened. I believe he thought I was joking, but I'd been properly researching and had answers for all his questions.

“It was a huge decision that we wouldn't make overnight, so we both went away to think."

She added: “In that time, Dan looked up everything there was to know about motorhomes and a week later, we sat down in that same room and he told me, 'Let's do it.'

“Not a single person we told said we were insane. Everyone thinks it's amazing."

So, that summer, the family started shedding possessions – either selling them on Facebook marketplace or donating them to charity – and did up their house ready for sale.

Saying goodbye to things, especially if they had sentimental value, was hard at first for Rosie, but she soon found it cathartic – even donating her wedding dress to charity.

Then, on 1 February 2019, they completed the sale of their house, buying a motorhome the next day.

“Our last day in the house was on 11 February," Rosie said. “Loads of friends and family came over to help us set the van up and take the last few bits to the tip."

“We all had a drink together and it was glorious weather," she said.

“When it was time to go, they all lined up down the road to wave us off. There were lots of tears, but the love and support we felt was incredible."

Driving south, the family took a ferry from Portsmouth to Saint Malo in France, before crossing the Pyrenees mountain range to Andorra, into Spain and then through Portugal.

Rosie, Winter, Dan and Monty, pictured here in their motorhome on the day they set off (PA Real Life/Collect)

“We had a really surreal moment driving from Arcachon to Lourdes in France," she said.

“We were hurtling down country roads through this endless, deadly flat land, when Dan and I looked up and suddenly there were the Pyrenees in front of us.

“They looked almost like a mirage. The snowy peaks were just there in the sky."

At the end of May 2018, they returned to the UK for a family wedding – finding their house-sitting stay “disconcerting," having completely embraced life on the road.

Their motorhome has two beds for the children, a pull down bed for the adults, a kitchen area, tables and chairs.

But it took some getting used to and Rosie recalled their initial journey across the Pyrenees, saying: “"We were still adjusting to motorhome living and finding a place for everything."

“By the time we went home for the wedding, though, we knew what we were doing and had made the van homely, by kitting it out with the kids' artwork, photos and tickets from the things we'd done, so it was hard to leave it.

“Now, the idea of being in a house just isn't for us. The kids call the motorhome home, and we get that same lovely feeling of relief and familiarity when we see it parked up, as you do pulling into your driveway after a long day."

Since leaving England again in September, the Beesons drove through Wales and Ireland, before exploring the Spanish desert, Gibraltar and Morocco, where they spent Christmas – keeping a Facebook blog, The Migratory Bees, about their travels, as they went.

Also writing a book about their adventures, they have made some incredible memories, and been moved by the camaraderie amongst travellers.

“There is a real feel that everybody helps each other," said Rosie. “Once Monty came to the rescue of a couple next to us who had locked themselves out, as he was small enough to climb through their motorhome's skylight.

“Another time we set up what we called the Beeson barbershop, cutting hair for anybody that wanted it on the campsite."

Trip highlights for Rosie so far have included a Game of Thrones tour of Ireland and spending Winter's fifth birthday in December riding camels in the Sahara Desert.

And she believes that seeing the world is providing a more valuable education for her children than they would ever receive in a classroom.

“Of course, fitting a family of four and the contents of a three bedroom house into a motorhome hasn't been without its challenges," she said.

“As he has autism, Monty thrives on routine and structure, so there are days when he finds things difficult," Rosie continued.

“But we make sure he regularly FaceTimes our relatives, so he has that contact and he's also keeping a journal of his adventures, which he loves doing."

Rosie and Winter relaxing in a hammock (PA Real Life/Collect)

“Our new life has made me realise how much we all accumulate," she said. “Now, I have two suitcases at my brother's house and all my other worldly possessions are in the motorhome.

“It's easy to attach sentimental value to things, but doing this has made me realise that I don't need to actually possess an object to be able to recall a memory."

Rosie now estimates her family can survive without working until September, when they will need to take odd jobs as they travel to boost their funds.

She said: “We've tried to be as savvy as possible, money-wise, so we can keep going for as long as possible.

“I don't worry about the future, as I've had nothing and worked my way out of it before, so I can do it again.

“People have said they wish they could afford to do what we've done, but we aren't rich, by any means. We just decided to live differently and not worry about material things as much."

The Beeson family in the Sahara Desert (PA Real Life/Collect)

She added: “This past year has been amazing for our family. The children have seen incredible places and met people from all over the world. It's really opened our eyes to what's important in life."

Some of their most special memories were made at Christmas, which was spent in Ait Ben Haddou, Morocco.

Rosie said: “Christmas has been difficult over the last few years, especially trying to celebrate the day when thinking of family who are no longer with us."

“But Christmas 2019 was the most relaxed we've ever had. The children only had a few presents, but they were so happy and grateful.

“We went out for a meal in a Chinese restaurant, and just took the day slowly. Of course we missed our family but we loved our plan-free day."

Now, though the family do not want to plan too rigidly, they hope to spend the next few months exploring Italy, Slovenia, Croatia, Montenegro, Bosnia and Herzegovina, Austria, Switzerland, Germany, Belgium, the Netherlands and Denmark.

Rosie concluded: “Dan and I used to spend our evenings exhausted at home, but now we sit outside our motorhome in a beautiful corner of the world and watch nature go by. I wouldn't change it for the world."

Winter, five, added: “I just love it! Our house has wheels and we can go anywhere in the whole wide world. I love seeing new things in all of the new countries, learning the languages and making new friends everywhere."