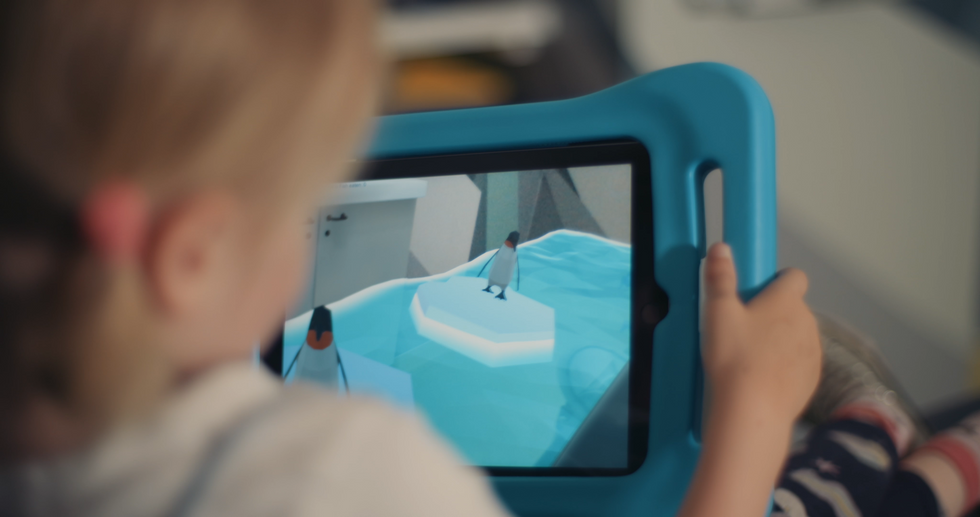 There is a clear relation between art and science.

Designers and artists have built a game to distract young burns patients during stressful treatments, which could help them get better quicker.

The augmented reality game has been developed to transform a treatment room at Sheffield Children's Hospital into a virtual environment of seas and woodland, filled with fun creatures with which patients can interact.

It was one of the first augmented reality apps to be used in a clinical healthcare setting, and was a collaboration between the hospital's art program Artfelt and the designers from Megaverse.

The theory behind the app is that it can distract children with burns who are undergoing treatments like wound dressings. Reducing stress hormones has been shown to improve wound healing, which in turn can potentially reduce scarring.

Children use a tablet to navigate different, calming environments, artwork on the walls becomes the backdrop for the game and a soothing soundtrack fills the room.

The Artfelt art program has already changed the way patients recover by improving their environment.

There is evidence that outcomes and recovery rates are influenced by the environment someone is in, so at… https://t.co/EBOF9CZgLG
— ChildHealthDay (@ChildHealthDay) 1568045437.0

“Procedural anxiety is usually due to a fear of pain, or memories of similar negative experiences," Dr. Charlotte Wright, senior clinical psychologist at the hospital, said.

“This can make repeated dressing changes following a burn increasingly distressing for a child, their family and our team. Negative experiences in hospital can hinder a patient's ability to cope with their burn injury and can increase wider symptoms of anxiety and trauma."

"Distraction has been identified as a useful non-pharmacological intervention for pain and procedural anxiety and using the Artfelt distraction app can help our patients cope with potentially painful procedures. The feedback from both patients and the staff team has been very positive."

Marnie-Jayne Smith suffered a painful superficial burn while her mother was cooking, and she now talks about how much she has enjoyed playing the game.

“At the start, she was very brave with the dressings but as the days have gone by, you can see she's been getting nervous on the journey and going quiet," her mother Samantha said.

“The last few times she just didn't want to do it. She absolutely loved the penguin game. When she played it, she was completely distracted and didn't even notice them dressing."

“Co-operation is so often key to procedures involving children and so it's really important to make them as fun as possible, particularly those who have longer stays and repeat appointments," Jade Richardson, arts and digital commissioner at Artfelt, added.