Liz Connor also looks at the symptons and treatments for PTSD. Warning, spoilers ahead…

The blistering Bodyguard finale attracted over 10 million viewers in the UK on Sunday, with fans waiting with bated breath to find out who was responsible for the death of home secretary Julia Montague.

The whodunnit series weaved some pretty far-fetched twists and turns over the past six weeks, but aside from the Scooby-Doo style confessionals and the fact we still don’t know how David Budd had time to bury the kompromat, there was one major plot hole that fans simply couldn’t get their heads around.

View this post on Instagram
Bumper weekend for the BBC as #bodyguard and #strictly deliver broadcaster's biggest non-World Cup audiences of the year #bbc #bbcone #drama #entertainment #strictlycomedancing #ratings #broadcast
A post shared by @ broadcastnow.co.uk on Sep 24, 2018 at 4:15am PDT

After the identity of the bomb maker was finally put to bed, troubled protagonist Budd was seen walking out of Commander Sampson’s office and straight into an Occupation Health session, finally getting help for the PTSD he’d been struggling with throughout the series.

While fans agreed that it was great that the series shone a spotlight on mental health, others were quick to point out that getting an immediate therapy appointment in the UK is pretty much unheard of – referring to the long wait times for free mental health services.

“Ugh. #Bodyguard finale was so far fetched. As if he’d get a mental health appointment within a week…” tweeted one viewer.

“The most unbelievable plot twist in #Bodyguard was not having to complete 27 page referral which got returned twice for an occupational health appointment,” added another.

Ugh. #Bodyguard finale was so far fetched. As if he'd get a mental health appointment within a week…
— Alfie Green (@ItsAlfieGreen) September 23, 2018

The most unbelievable plot twist in #Bodyguard was not having to complete 27 page referral which got returned twice for an occupational health appointment
— Sarah Lee (@toxic_harpy) September 23, 2018

I think the main takeaway from BBC’s #Bodyguard is a clear and definitive guide to the hoops you have to jump through before being able to get a mental health appointment.
— taha (@KhanStopMe) September 23, 2018

If, like Budd, you’re experiencing issues with your mental health and your GP refers you to a specialist, the NHS says that you should be seen within a six-week window – although there is an 18-week maximum waiting time for access to mental health services.

The NHS say that they are working to reduce waiting times for those experiencing mental health issues.

Here is everything you need to know about Budd’s condition, its real-life symptoms and how it can be treated.

What did David Budd suffer from? 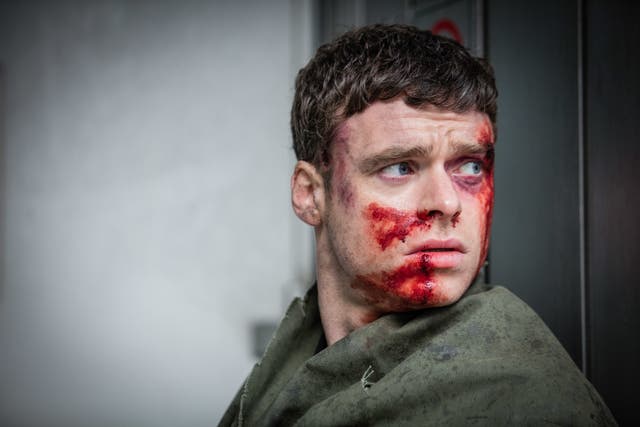 Post-traumatic stress disorder (PTSD) is a mental health problem that some people develop after going through a life-threatening event. In the case of David Budd, it was serving in the Afghanistan war, although people can also experience it after a car accident or sexual assault.

It’s normal to feel shaken or have trouble sleeping after this type of event, but most people start to feel better after a few weeks or months. If your symptoms carry on for longer and interfere with your work or home life, they may be down to PTSD.

What are the symptoms?

PTSD symptoms can either start soon after the traumatic event, or they may not appear for months or even years later. Some people find that they may also may come and go over many years.

This can include anything from bad memories or nightmares, to reliving the event through vivid flashbacks.

Living with #ptsd is very difficult.. Ptsd is a debilitating condition that brings about physical symptoms of being, and feeling, very unwell.
— Paul Keegan (@levitymediauk) September 23, 2018

2. Avoiding situations that remind you of the event

PTSD sufferers may try to avoid situations or people that trigger memories of their trauma, or avoid speaking about it to others.

3. Having more negative beliefs and feelings.

You may feel guilt or shame or lose interest in activities that you used to enjoy as a result of the trauma you’ve experienced.

View this post on Instagram
So this gets me through to lunchtime #ptsd #ptsdrecovery #onestepatatime #onedayatatime
A post shared by CHW (@mistysidney) on Sep 24, 2018 at 12:47am PDT

If you’re suffering with PTSD, you may feel on edge or always on the lookout for danger.

PTSD can also affect your ability to concentrate at work or switch off and sleep at night. It can also have an impact on your mood; you might suddenly get angry or irritable, startle easily, or pick up unhealthy lifestyle habits like abusing drugs and alcohol.

What are the treatments available?

The NHS say that there are three main times of psychological therapies used to treat people with PTSD like David Budd. These are:

View this post on Instagram
Alot of people ask me what cognitive behavioural therapy is and wonder if it's for them. CBT is a talking therapy that examines how your thoughts influence your behaviours and then has a direct relationship to your emotions or mood. Changing the way we look at things and then doing things differently can show us that situations we previously feared can be overcome. It's powerful because it can change the way you see yourself over time. CBT is a safe, effective treatment for many clinical disorders and due to it's rigorous empirical testing, has a robust evidence base. It's also been approved by NICE. We at Cestria are committed to your recovery and wellbeing. We are a small team of fully qualified, experienced clinicians who have either practised extensively or are still practising within the NHS and privately. We have clinics across Chester, North Wales and Wirral. CBT is suitable for the following conditions #depression #anxiety #ocd #ptsd #socialanxiety #panicattack #phobia Call us today for your free telephone consultation on 07538 785968 Have a great day! #chester #wirral #northwales #cheshire #cheshirelife #selfcare #wellbeing #healthylifestyle #healthymind #goodvibes #hope #recovery
A post shared by Cestria Therapy (@deborah_grey1806) on Sep 24, 2018 at 12:18am PDT

CBT is a type of talking therapy that can help you to manage and change the way you think.

Trauma-focused CBT often involves confronting your traumatic memories by revisiting the experience in your mind. During this process, the therapist will help you to cope with any unsettling feelings, while identifying negative or unhelpful thoughts about the experience.

You may also be encouraged to complete graded exposure therapy, if your traumatic experience involved a type of activity that you can revisit – such as driving a car if you had an accident.

Been receiving EDMR for complex PTSD over last few weeks but unfortunately my juvenile arthritis is now flaring so paused while we explore… Possible link or unfortunate coincidence? Would love to discuss with those who have experience or specialist knowledge #PTSD#LTC#EDMR
— #hellomynameis Helly (@hellygraham) September 14, 2018

The NHS says that It’s not clear exactly how EMDR works but it may help you to change negative thought patterns.

Some might find it helpful to speak about their issues with other people who also have PTSD.

What I have been learning from #grouptherapy is priceless, and I wouldn't trade it in for anything in the world. I am going to miss #therapy.
— K-Shhh (@kaneesha77) September 20, 2018

As well as therapy, antidepressants can be effective in treating PTSD in adults too. Some specific SSRIs (selective serotonin reuptake inhibitors) and SNRIs (serotonin-norepinephrine reuptake inhibitors), which are usually used for depression, are also prescribed for PTSD. These include sertraline, paroxetine, fluoxetine, and venlafaxine.