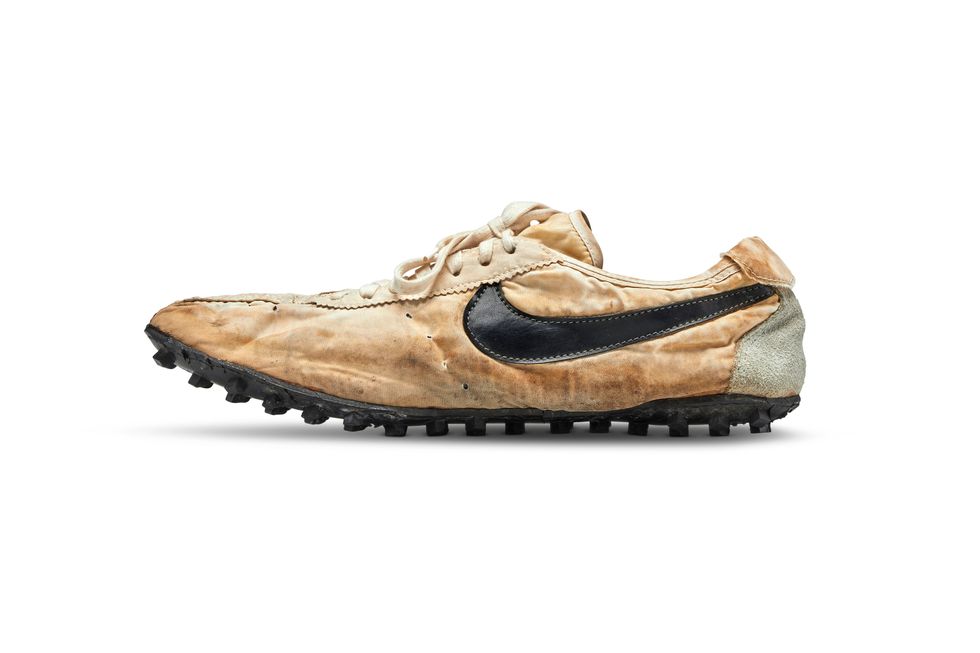 A pair of rare 1972 Nike running shoes have sold for $437,500, setting a new world auction record for a pair of sneakers.

The Nike Waffle “Moon Shoe" was one of the first to be created by Nike co-founder Bill Bowerman and designed for runners at the 1972 Olympic trials. Only 12 were ever created, with few of these still in existence.

The shoes were hand-made by one of Nike's first employees, Geoff Hollister, and is the only pair known to exist in an unworn condition.

Mr Bowerman is said to have been inspired to create the waffle sole traction pattern found on the brand's early running shoes by tinkering with his wife's waffle iron, pouring rubber into the mould to create the prototype.

The so-called “Moon Shoe" got its name from the resemblance between the “waffle" pattern in left in the dirt and the famous tracks left on the moon by astronauts in 1969.

The shoes were sold to collector Miles Nadal, who purchased the other 99 lots in Sotheby's and Stadium Goods' auction of rare sneakers in a private sale.

The shoes are the only unworn pair known to existSotheby's/PA

Mr Nadal had offered to buy all 100 lots, but the auction house and Stadium Goods opted to keep the Nike racing flats available for public auction, which Mr Nadal won.

The amount he paid far surpassed the pre-sale high estimate of $160,000 dollars.

The previous world auction record for a pair of trainers was set in 2017 with $190,373 dollars paid for a signed pair of Converse worn by Michael Jordan in the 1984 Olympic basketball final.

Mr Nadal is the founder and executive chairman of Peerage Capital, an American private investment firmSotheby's/PA

“I am thrilled to acquire the iconic Nike 'Moon Shoes,' one of the rarest pairs of sneakers ever produced, and a true historical artefact in sports history and pop culture."

“When I initially acquired the 99 other pairs in this auction last week, I just knew the Nike's had to remain part of this remarkable collection, and I couldn't be happier with the result."

“I think sneaker culture and collecting is on the verge of a breakout moment, and I hope Sotheby's and Stadium Goods will continue to lead the way in this exciting new future."

An avid collector, Mr Nadal plans to display the sneakers alongside his collection of classic cars at his private museum in Toronto, Canada.

He plans to open the museum to friends, family, charitable organizations and others, upon request.

The shoes were made by one of Nike's first employeesSotheby's/PA

Mr Nadal is the founder and executive chairman of Peerage Capital, an American private investment firm with over eight billion dollars in assets under management, and 1,500 employees.

“We are excited the iconic Nike Moon Shoe achieved more than double the previous world auction record for a sneaker today."

“The success of Sotheby's and Stadium Goods Ultimate Sneaker Collection sale is a testament to the strength of this burgeoning collecting category."

“We're extremely pleased that all 100 pairs of this exceptional selection of rare sneakers will remain together with Miles in his private museum."