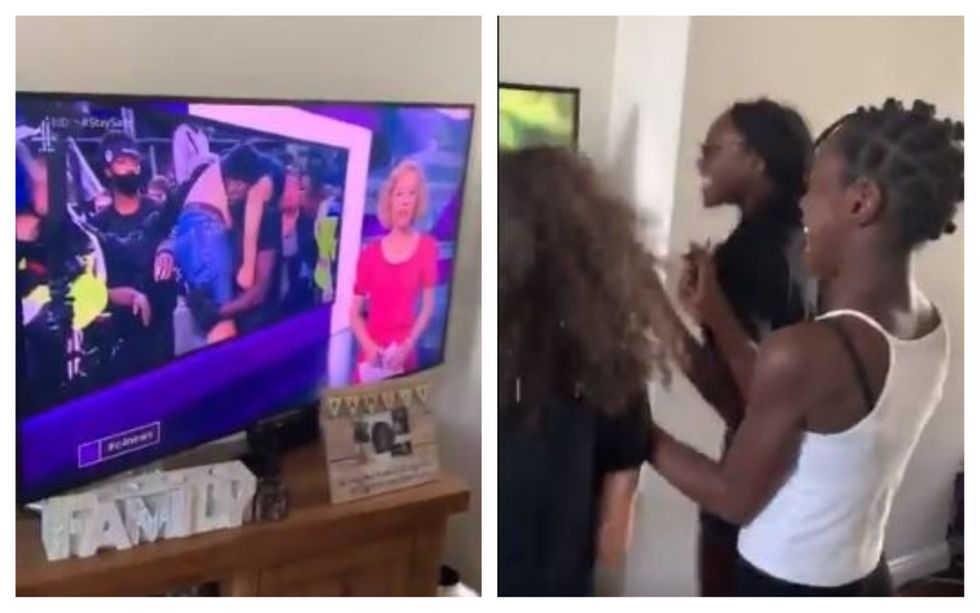 The daughter of a Black Lives Matter protester who rescued an injured White man celebrated excitedly as her father appeared on TV hailed for his heroics.

Patrick Hutchinson, a personal trainer and grandfather, made global headlines after saving the man from harm during violent protests in central London on Saturday.

His daughter Sidéna, 10, was filmed celebrating excitedly with friends Kai'Yonna and Chela when an interview with her now-famous father was broadcast on Channel 4 News.

The clip went viral and Ms Danso, from Croydon in south London, said her phone had barely stopped vibrating with messages.

She added that Sidéna was shocked at her father's newfound celebrity status but was incredibly proud of him.

Mr Hutchinson formed a group with four of his friends, who are part of London-based close protection group Ark Security, to protect young Black Lives Matter protesters from getting caught up in the violence at the protests.

They took it upon themselves to be the “overseers" at the protest, to make sure those who needed help were taken safely to emergency service workers.

The group spotted a lone White man being dragged by young Black protesters through a crowd and thrown on the steps near the Royal Festival Hall.

“His life was under threat so I just went and scooped him up, put him over my shoulder, and started marching towards the police with him."

In an interview with BBC Breakfast, Mr Hutchinson explained:

"My friends and I turned up on the day to oversee things and check things didn't get out of hand."

"They noticed there was some trouble further away."

"There was a bit of a clash between some of the so-called statue defenders and BLM protesters... some of the far right protesters dispersed and left one solitary protester by himself."

"It wasn't a good place for him to be. He was on his own and it was not a pretty scene."

BBC Breakfast spoke with Hutchinson and his daughters Kendal, 8, and Sidéna.

Daddy did such a good job: Daughters of BLM hero share their prideyoutu.be

"I'm just happy that daddy went and saved the man because he could have died."

"He's always been helping people like that so for people to see that as well… It felt really good."

"You have to hope that things will be better and be positive, otherwise what is the point?"

"I have to raise my daughters to believe that one day they will have an equal opportunity just as any other child out there in the world in whatever they endeavour to do in their futures."

"I really do because what is happening now it impacts on me and my sister's future, what is going to happen to us."

"It really makes an impact so we can try and make things better for our own futures."