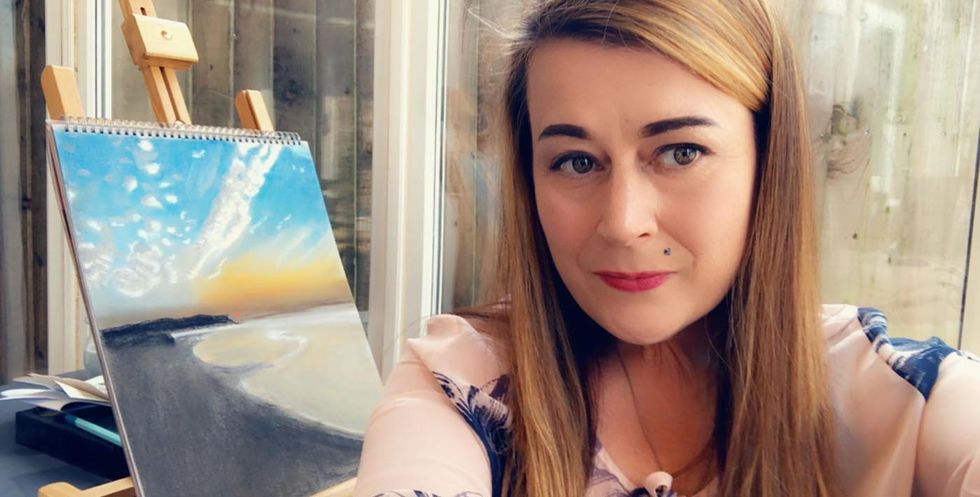 A former accountant who was turned into a bedridden “zombie" by an addiction to prescription opiates has told how she has “cured" her habit and her pain using art.

Battling years of agony caused by everything from menstrual problems to hypermobile—or unusually flexible—joints, Emma Hunt, 44, became so dependent on analgesic medication that, at her worst, she was taking 30 tablets a day.

Confined mainly to one room for a decade, her thriving career over and numbed out by drugs, her hope was finally restored four years ago when a new specialist diagnosed her with Ehlers-Danlos syndrome—a group of inherited conditions affecting connective tissue—and vowed to wean her off medication.

Emma, of Egremont, Cumbria, who then rediscovered her love of art, recalled:

“For about 10 years, I just stayed in my room, numb, like a zombie, with the television on."

“Friends would have to come over to bring me food. I would not open the curtains or go downstairs. It was just a terrible, lonely existence."

“I had depression, I felt helpless and worthless and it just made me anxious. I had no drive to do anything."

“There were very dark times when I contemplated suicide, as I felt a complete failure. I had no career and no money and I was overwhelmed by pain."

Now back together with her first love, meter reader Steven English, 45, who she first dated at school, Emma told how, during her “dark years" she was taking paracetamol, anti-inflammatories and the opioid painkillers fentanyl and OxyContin every day.

“My bedroom had become my prison cell. I spent 10 years in bed, it was no life whatsoever."

“I would just take more and more painkillers. I was on about 30 tablets a day."

“Over time you become resistant, so you need a higher dosage or you need something else. The pills didn't seem to be working, so I'd just take more and more until I was addicted."

“The worst thing about the pain of addiction is that you can't see it. It wasn't until I started to come off the drugs that I realised how bad it had been."

“I didn't think there was anything wrong with me, but I'd spent a quarter of my life in bed, how can that not be wrong?"

Hypermobile as a child, meaning her joints were more flexible than normal, she regularly experienced dislocations.

“My flexibility became a bit of a party trick. I used to be able to put my feet on the opposite knee and shuffle around. I was very bendy and stretchy. I'd fold up like a deck chair."

Most days the pain would be on a scale of nine out of 10. It was like a constant sharp pain. I would wake up and my knee would have dislocated
Emma Hunt

But her first experience of extreme pain came during menstruation and in 1997, then aged 22, she was diagnosed with endometriosis, which occurs when bits of the tissue that lines the uterus attaches itself to other pelvic organs.

Treated with painkillers and surgery to remove the tissue, at just 27 she also had an elective hysterectomy to remove her uterus, traumatically discovering at the same time that she was having an ectopic pregnancy—when a fertilised egg, which will not develop into a baby, implants itself outside the womb and can be risky to health.

After this difficult episode, Emma, then working as an accountant in Oxford, continued to manage her pain with medication but had to give up her job in 2005, having been diagnosed with fibromyalgia, a long-term condition that causes pain all over the body.

“The pain was getting too much for me. I remember one day being in so much pain waiting for the bus, I was praying that the next one would be mine so I could get home. I just thought, 'I can't do this anymore.'"

For the next two years, she was bedbound in her Oxford home, before deciding to sell up and return to Cumbria in 2007 to be close to family.

With her health continuing to decline, she made regular trips to the GP, where she would be prescribed stronger painkillers.

“Most days the pain would be on a scale of nine out of 10. It was like a constant sharp pain. I would wake up and my knee would have dislocated."

“I developed sleep apnoea, when your breathing stops and starts while you sleep, because of the painkillers. As a result, I had to wear a nasal mask connected to a continuous positive airway pressure (CPAP) machine, to monitor my breathing in the night."

She became increasingly insular, and until 2016, she lived mainly in her bedroom, rarely getting out of bed.

Emma's salvation came four years ago, when she saw a specialist at Newcastle's Royal Victoria Infirmary and was diagnosed with Ehlers-Danlos syndrome which, according to the NHS, is a group of rare inherited conditions caused by faults in certain genes that affect connective tissue in the body, and can be disabling for some sufferers.

“It felt such a relief to have a proper diagnosis. The consultant said she was going to start weaning me off the painkillers."

“That's when I realized how strong my addiction had been. I thought it would kill me if I came off them."

“But as soon as doctors started to reduce the dosage, I began to feel a bit more alive. I realised how much of a zombie I had been. I couldn't function, I'd been in lock down mode."

“I never saw myself as an addict, but with hindsight I was—most likely for the 24 years I was taking painkillers."

And as her senses were reawakened, so was Emma's childhood love of art.

“When I was about seven, I remember being really excited because I could draw squirrels. I was told by a teacher that I had a gift."

“By 11 or 12 I was painting and taking commissions to do portraits. But as I got older, I moved away and started to focus on my career. Life got in the way and I stopped doing it."

“After I came off the opiates 18 months ago, I woke up again. I could see how beautiful the place where I live—the Lake District—is. I'd wasted all that time with the curtains closed."

“While I was taking so many pills, everything had been black, white and grey. My senses had been completely numbed. There was no depth to anything. I was getting no pleasure out of anything."

“But now I could see color. I could taste things. It felt like I was seeing things for the first time."

“I'm up and active and have actually lost six stone. Before, I was a size 22 binge eater, but 18 months ago I started doing the Keto diet and am now a size 12."

Now it's just pure joy. I'm not thinking about anything else when I'm doing it. I don't feel stressed and it's such a distraction from the pain.
Emma Hunt

Taking up crochet has also helped to distract Emma from her pain, which she still suffers in her joints, meaning she needs a wheelchair or stick when she goes out.

She suffers inflammation in her joints, and when she stretches, she regularly has to roll her body up and forward to pop her ribs back into place, as they can dislocate, which can be really painful.

Then, last summer, a friend suggested that Emma should take up painting again.

“I picked up my paper and pastels and felt great, it was such a change. I was still rusty but I really enjoyed it."

“Now it's just pure joy. I'm not thinking about anything else when I'm doing it. I don't feel stressed and it's such a distraction from the pain."

“When I'm painting I'm focused on that rather than pain, as that moment when you're creating something is a wonderful thing."

“Being able to paint changed everything for me."

“I just feel a lot happier and a lot calmer and will sit in my conservatory drawing, rather than lying in my bed like a zombie."

And, in August last year, Emma even found the courage to ask a cafe owner in Whitehaven if she could display some of her paintings there.

“I showed him pictures of my paintings on my phone and he said to bring them down. I couldn't believe it."

Emma has also been holding exhibitions in local gallery The Gather in Ennerdale, where she has 20 pieces of Lake District landscapes done in pastels displayed until February 29.

There is a chronic opium addiction problem in this country and, while I'm not telling other people to come off painkillers, I would like them to see that there's a different way
Emma Hunt

“Art has saved me. I'm so different to how I was before."

“I've gone from being this depressed person, isolated and lonely, to someone who is having exhibitions."

“It also helps me with my pain management, both physical and mental. I would never go back to painkillers because it's a vicious circle."

“There is a chronic opium addiction problem in this country and, while I'm not telling other people to come off painkillers, I would like them to see that there's a different way."

Emma even feels strong enough now to help others and is running art therapy sessions at a shelter Women out West, which supports vulnerable women across west Cumbria, and homeless residence Calderwood House in Egremont.

“It's amazing to see how it helps others. People will say, 'There's no way I can do that, you must be having a laugh'."

"But then they can and for that time when they're concentrating on their art, they aren't thinking about anything else. It's simple, but it really helps."