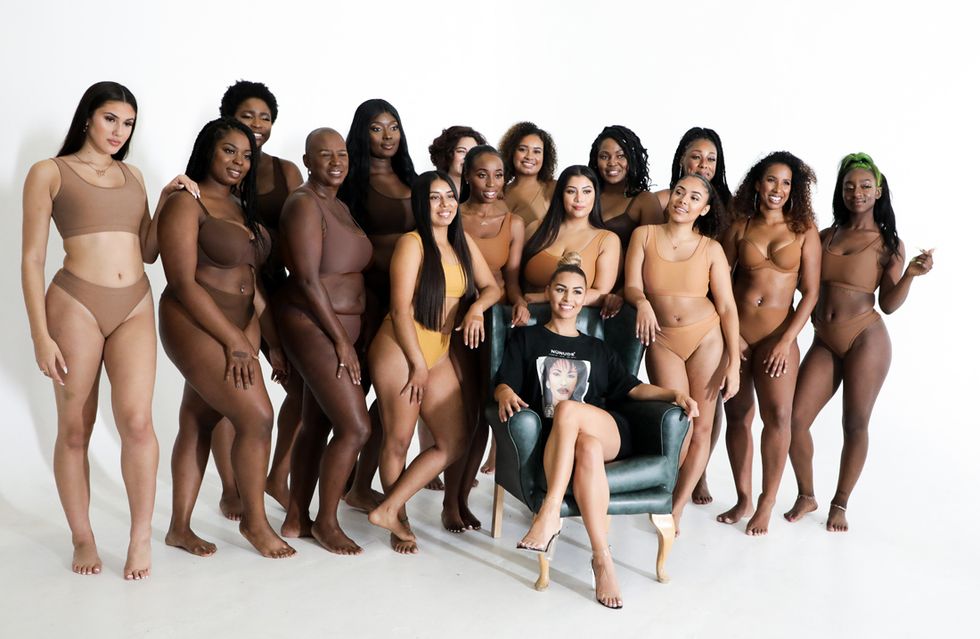 This entrepreneur has built a business worth around $1 million in just three years. And boosted interest in her NuNude underwear brand by forcing a change in the dictionary definition of the word "nude."

When Joanne Baban-Morales first launched her business she focused on selling underwear that matched all skin tones. However, she discovered the word 'nude' was defined in the Oxford English Dictionary as "of a pale pinkish-beige color" – excluding darker complexions, and that wasn't an accurate description of the word.

Starting a NuNude Instagram in late 2016, several months before launching the business Baban-Morales capitalized on the buzz around her brand and gathered thousands of signatures, which resulted in "nude" being redefined more accurately as "a color of clothing or make-up resembling that of the wearer's skin."

This is one of many triumphs for Baban-Morales.

“It was amazing to know I'd actually got the dictionary to change its definition of nude and made such a big difference," she said.

“When we launched NuNude, supermodel Tyra Banks reposted our post and boxer Anthony Joshua said it was a 'great idea,' all of which helped to increase our reach and get the backing we needed."

Already making waves on social media when she officially launched NuNude – an undergarment brand catering for all skin tones, ethnicities and sizes – in March 2017, it has since racked up 100,000 Instagram followers.

As a Latina woman, she wanted to make sure others with complexions like hers would feel represented.

“Every woman needs nude underwear – but not every woman can find a nude shade to suit her skin tone – and that's why I decided to launch NuNude."

“I wanted to create a brand that not only empowers all women of all shapes and shades to love themselves, but to challenge the fashion industry too. Fashion shouldn't be limited to one skin tone, or one size, it should be inclusive of everyone."

And the public clearly agrees, as her products are now stocked by retailers in the USA, boutiques in Colombia and other parts of South America, and she has secured a large, loyal UK customer base through the NuNude website and social media channels.

“We stock products in sizes XS to XXXXL and offer nipple covers, shape-wear, body-cons, jumpsuits, slim-wear and plasters in all shades of nude – as we want to unite all women under one roof," she said.

Already an inspirational businesswoman, despite still being in her 20s, Baban-Morales says the entrepreneurial spirit is in her genes. Her mom owned her own graphic design business by the time she was 21, and her dad was the head of his own media company.

“I've always been surrounded by business-minded people who have inspired me," she said. “My mum and dad are huge inspirations and my 67-year-old aunt, Martha, who lives in Peru, is my biggest inspiration.

“She started running a little cafe years ago which became so popular, she's transformed it into a club and restaurant venue."

But Baban-Morales is keen to stress that she worked hard to make a name for herself.

“My dad's hugely successful, but he's never spoon-fed anything to me," she said. “I mean, who wouldn't want a little short cut? I know I did!"

“It's a blessing in disguise, though, because I can honestly say my business has been built from my own blood, sweat and tears."

Investing the money she had saved from her day job in an office she has since been told her business is worth around $1 million.

“I've never hit minus yet and I'm still in profit, which is a huge achievement for a start-up company," she said.

“I've had to take a bit of a hit on my wages, because I'm hoping to get the backing of an investor and it always looks more favorable if you're not taking a big wage," she said.

“But I've been told by a valuer the business is worth around £1 million, so if the worst came to worst on a rainy day, I could always sell it and then reinvest."

Although she runs NuNude single-handily, she relies on a volunteer advisory board to help when it comes to making decisions. And she hopes to stand out by showcasing real women.

She uses social media followers of NuNude rather than professional models to showcase her garments. And organized a pop-up fashion show in Shoreditch during the 2017 London Fashion Week, to rebel against the industry.

“I want to show the industry that the products are for real women – not just model-like women," she said.

“And at London Fashion Week, I wanted to show that women of all shapes, sizes and abilities can walk the catwalk," she continued.

“Our show was called 'Taking Diversity to a Whole New Level', and women of all backgrounds and ethnicities strutted their stuff in our shape-wear."

Always a “wheeler dealer," Baban-Morales said her taste for business started at school where she sold sweets to her friends.

“I've always been a bit of a wheeler dealer. When I was at school, I'd buy big packets of sweets and then sell them individually to my classmates to make a profit," she said.

But not all her ventures have enjoyed her current success, with a fledgling photo booth business she launched soon after graduating from Royal Holloway University, with a media production degree, failing.

“I'd found an internship at Sky TV and Fox international during my third year of university in 2014, but once I graduated, I couldn't get any paid work in media," she recalled.

Instead, after holding down various part-time jobs in retail while she studied, she looked for alternative ways to make money.

“I was at my friend's wedding and she'd hired a photo booth for the reception," she recalled. " I got talking to the women who she'd got it from, who said all she did to make £500 was drop off the booth and pick it back up from venues. I couldn't quite believe it, I was just like, 'How much?'"

Gathering every penny she had saved from her part-time jobs over the years, in November 2014 Joanne invested $12,000 in a photo booth.

“I kept it in my front-room while I worked out what to do with it," she said.

“I started advertising photobooth services online in December and I got booked up quickly – making my money back within six weeks."

Making enough to hire three employees and buy two additional photo booths, sadly, she overstretched herself and as quickly as her business had grown it went bust.

“I was 21, young and stupid – and I got greedy. I decided to get rid of my employees and do it all myself to cut costs. It wasn't as easy as I'd thought it would be, though, and on one occasion I left the van door unlocked by mistake and all three photobooths, worth £10,000 each, were stolen," she said.

“I was young, a bit naive and I suppose I just got a bit ahead of myself and it backfired," she said.

When she tried to breathe new life into the business, her heart was no longer in it, so she took a nine to five job in an office to save up again, so she could invest in another venture.

“It's so important to have sound legal advice when setting up a business," she said.

“Back then, I was so naive and tried to work out everything myself."

“Now I work with Primas, a legal firm, that works closely with start-ups to advise on funding, investment and all legal issues facing small business owners, which is a huge help," she said.

Since learning from her mistakes, Baban-Morales has made a huge success of NuNude and even organizes workshops to empower other women to have self-confidence and follow their dreams.

“The brand is still very much about shape-wear and underwear, but it to also stands for encouraging confidence in women," she said. “I give talks at universities about breaking into the fashion industry too."

“Soon, I'm hoping to host female networking events as well as workshops because I strongly believe your network is your net-worth," she added.

And ambitious Joanne only has high hopes for the future.

“I want to continue to build the NuNude brand and eventually make it the one-stop shop for all skin tone products," she said.

“I want to expand into make-up in the next year or so. But mostly, I want to continue to be disruptive within the fashion industry and to encourage self-love in women. My ultimate aim is to become so successful I can be the female version of Alan Sugar."

“I want to earn enough so I can invest in other women setting up their own businesses.This country definitely needs a female version of Lord Sugar and I'd love that to be me."

Daniel Rodgerson, Senior Associate in Corporate and Commercial at Primas, said Baban-Morales was a fantastic advocate for empowering and supporting those around her and her entire brand encompasses that.

“It's been a real pleasure sitting on Joanne's advisory board and working with her during the growth of NuNude," he said.

“I know from personal experience that setting up your own business can be a really daunting time, and so having the right people in your corner to properly advise you can be really helpful."

She hopes to grow her empire and use her influence to help other women entrepreneurs.